Arts & Culture
Ludus et Veritas examines the graphic representation of university academic and athletic programs, investigating who these dual identities serve and how students and athletes are represented, while questioning the use and abuse of student athletes as resources.
No items found.

This project was created in pursuit of a Master's Degree in Graphic Design from the School of Design at The University of Illinois at Chicago.

Ludus et Veritas: 14/28 University Identities examines the identities of 14 university athletic and academic programs, and the graphic representation of students within those programs.

This project is interested in whom these dual identities serve — and how students and athletes are represented — while questioning the use and abuse of student athletes as resources. I've experienced these institutional divisions first hand as a student athlete, watching them culminate and crescendo at the university leaving many student athlete peers, friends, and family without a sense of identity and belonging. These unspoken disparities are juxtaposed visually, narratively, informationally, and materially in the publication, reflecting our cultural priorities for students and athletes. Ludus et Veritas acknowledges and critiques design’s role in misframing the purpose of educational institutions and athletic programs, spotlights the social and economic implications of these two graphic identities, and attempts to connect with those affected by this identity divide.

Ludus et Veritas progresses through seven sections — a preface, introduction, four chapters, and a type specimen. The preface of the book are to-scale illustrations of popular athletic fields from an Olympic running track, to a soccer field, basketball court and finally a football field. The illustrations echo the romanticized view of each sport and lead to the grid of the book which is proportional to the lines and typography of an American football field. The introduction is a transcription of the commentary of the 2007 Tostitos Fiesta Bowl as part of the Bowl Championship Series (BCS) of the NCAA Division I football season. The commentary opens with famed announcer Thom Bennaman saying:

It is a spectacular night in the valley of the sun as we welcome you to Glendale, Arizona as the BCS bowl Bash continues on Fox. In this sensational first year venue, Boise State tonight steps onto this national stage playing the role of David trying to take down Goliath. Oklahoma after all is the winningest college football program in the nation since World War Two and they are the heavy favorite in this Tostitos Fiesta Bowl game.

This text is oriented on the grid of the book established by the typography of a football field, switching sides each time the speaker changes. This establishes a rhythm for the publication and underpins the remaining chapters, weaving through two overtimes, revealing deeply personal information about the athletes, such as psychiatric appointments, one student's father being let out of jail for the first time in years, GPAs and more—information that is otherwise private in the life of a student.

The book then proceeds through its four main chapters analyzing 14 Universities—seven that are known for their academics, and seven known for athletics.

The final section of the book presents a type specimen. The typeface, used throughout the publication, was cut from astro turf—the substrate that underpins many American athletic fields—photographed, re-rendered, and converted to a usable format. The weights of the typeface were each cut from the same weight base, but the length of the turf determines the thickness of the letterform (short grass made for thin letterforms, long grass made for bold letterforms). This method of physically cutting letterforms references type-cutters of old while also speculating on ways graphic designers might fuse academic and athletic fodder.

Also in the last chapter, the type specimen was created using sports phrases that have found their way into everyday use (such as: go for gold, down to the wire, touch base, etc.) translated to Latin. This is a nod to academia's use of Latin mottos, of which all the studied schools are also featured in the specimen chapter.

Overall, the book is complex, layered, and filled to the brim with thought provocation. It was received as one of the best Master's Thesis projects ever at the University of Illinois at Chicago School of Design.

Self-initiated projects are intended to keep up with critical engagement in the field. There may be a brief, may not be.

Year
Type
Publication
Oops! We may not have submitted this work to any notable publications.
No items found. 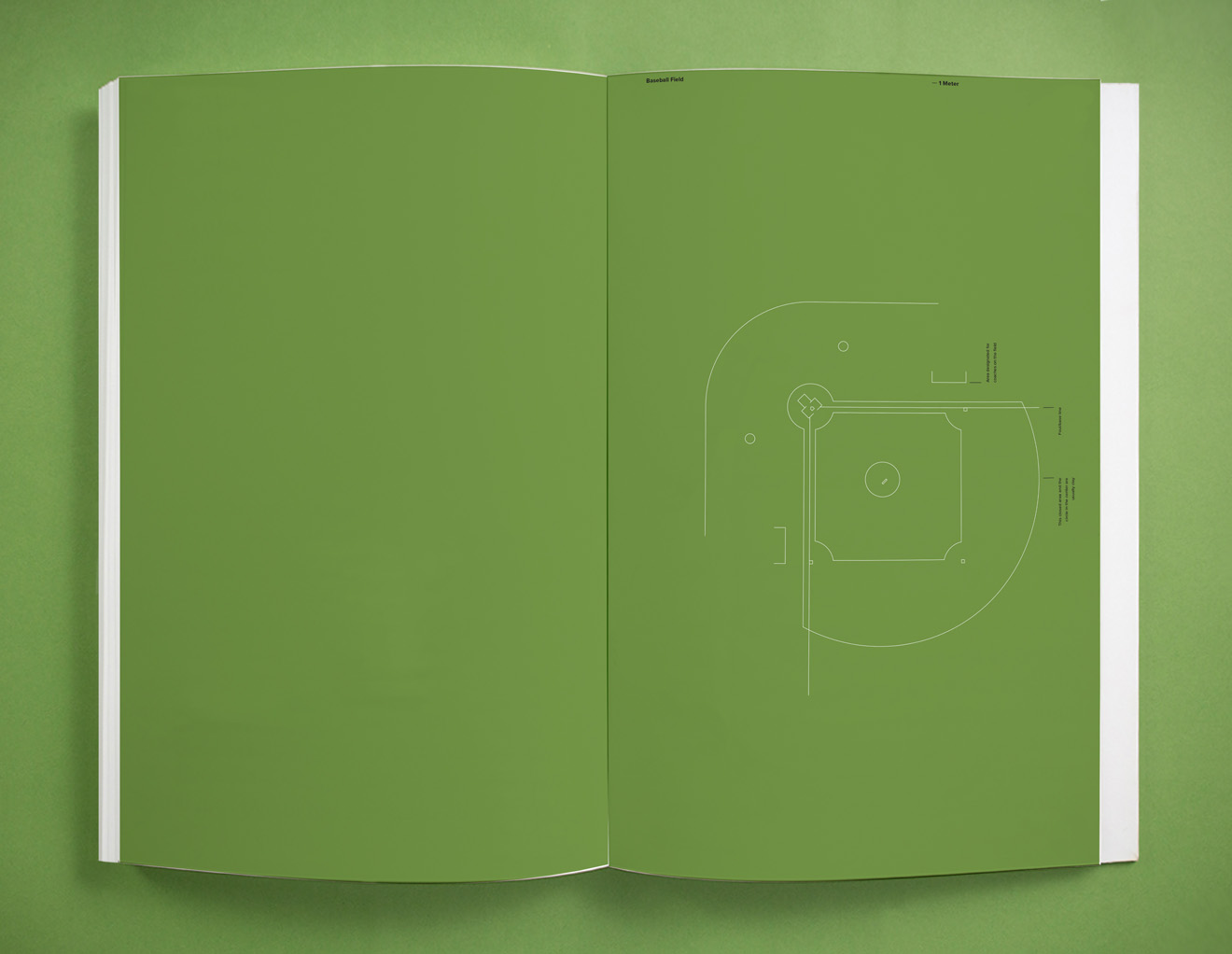 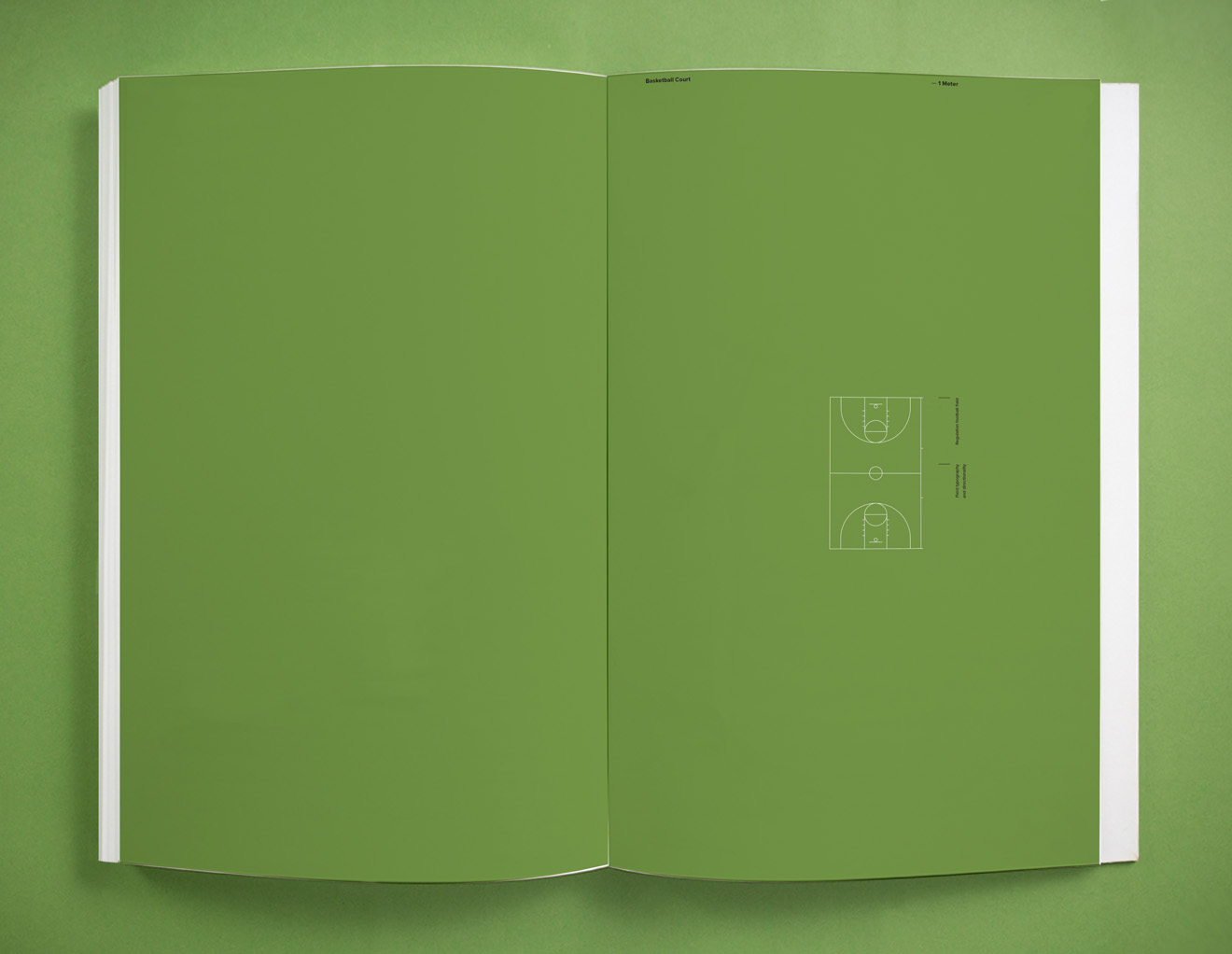 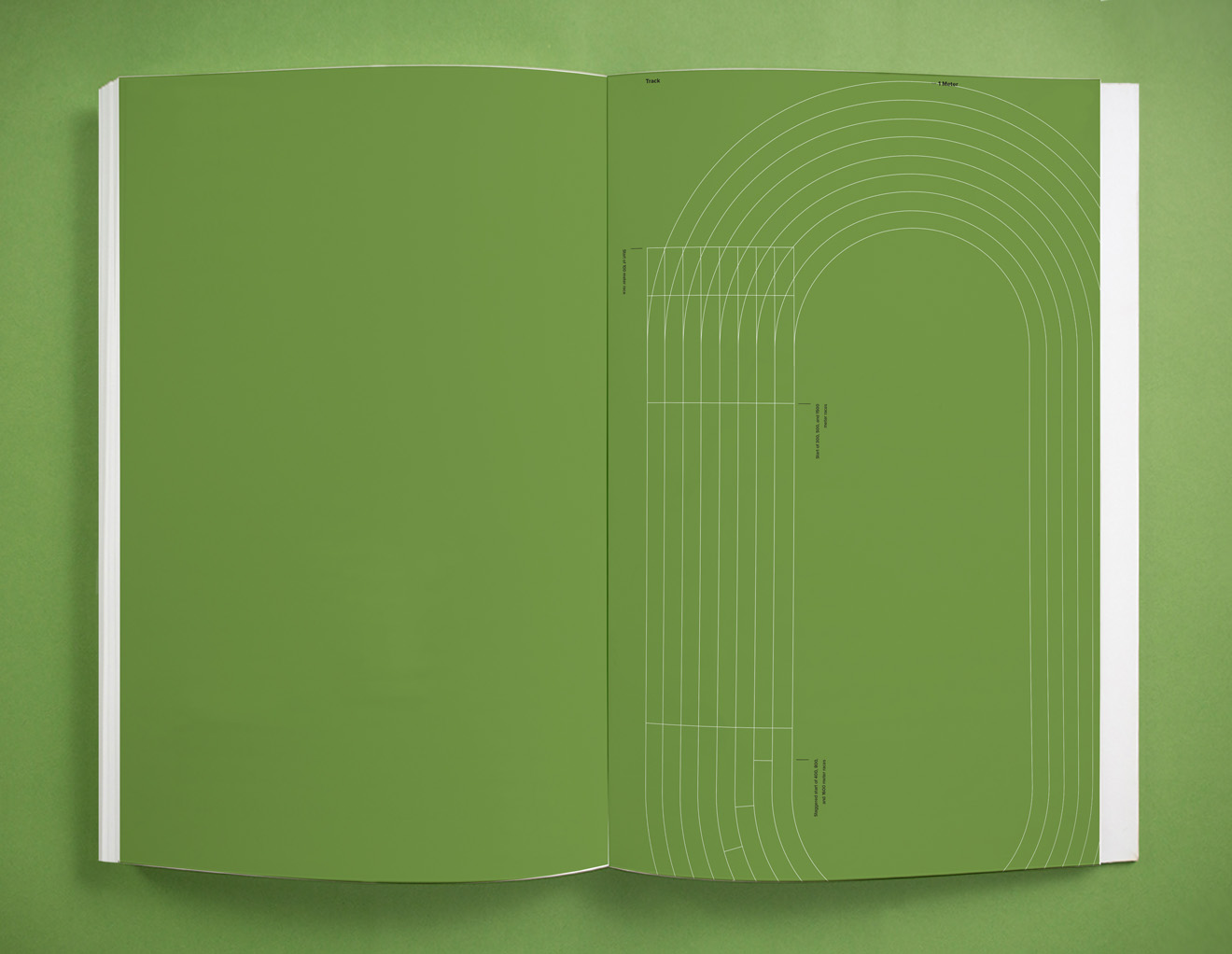 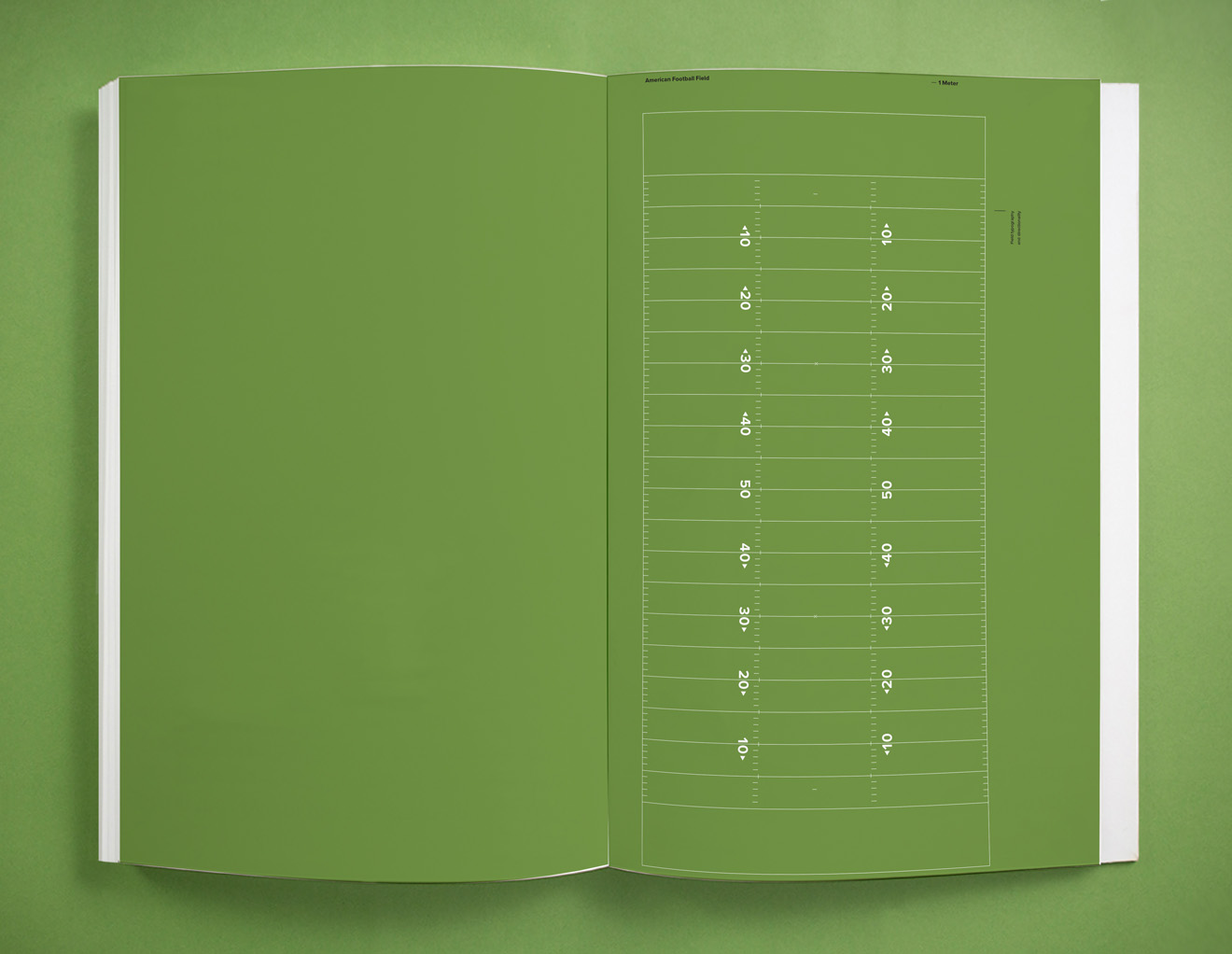 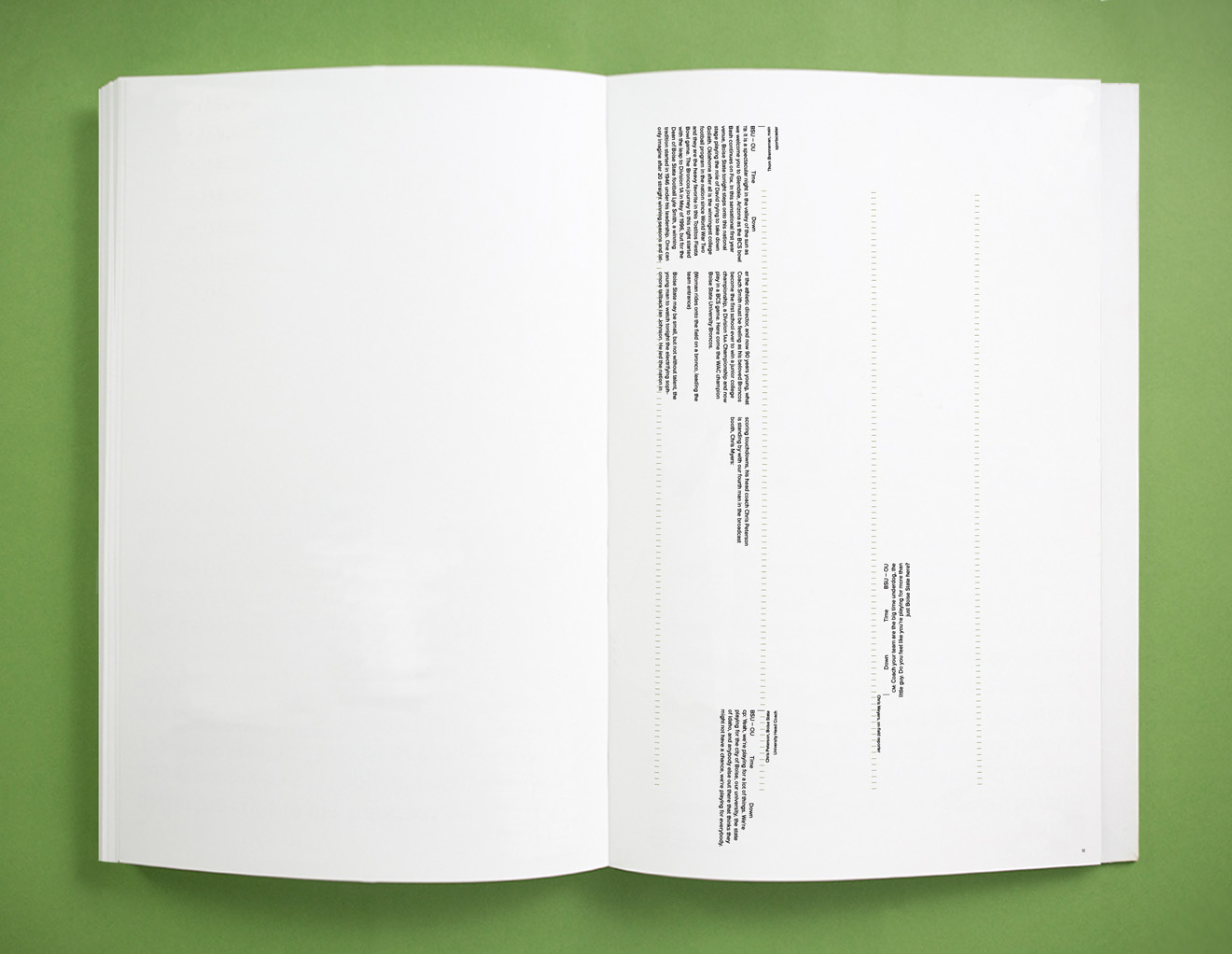 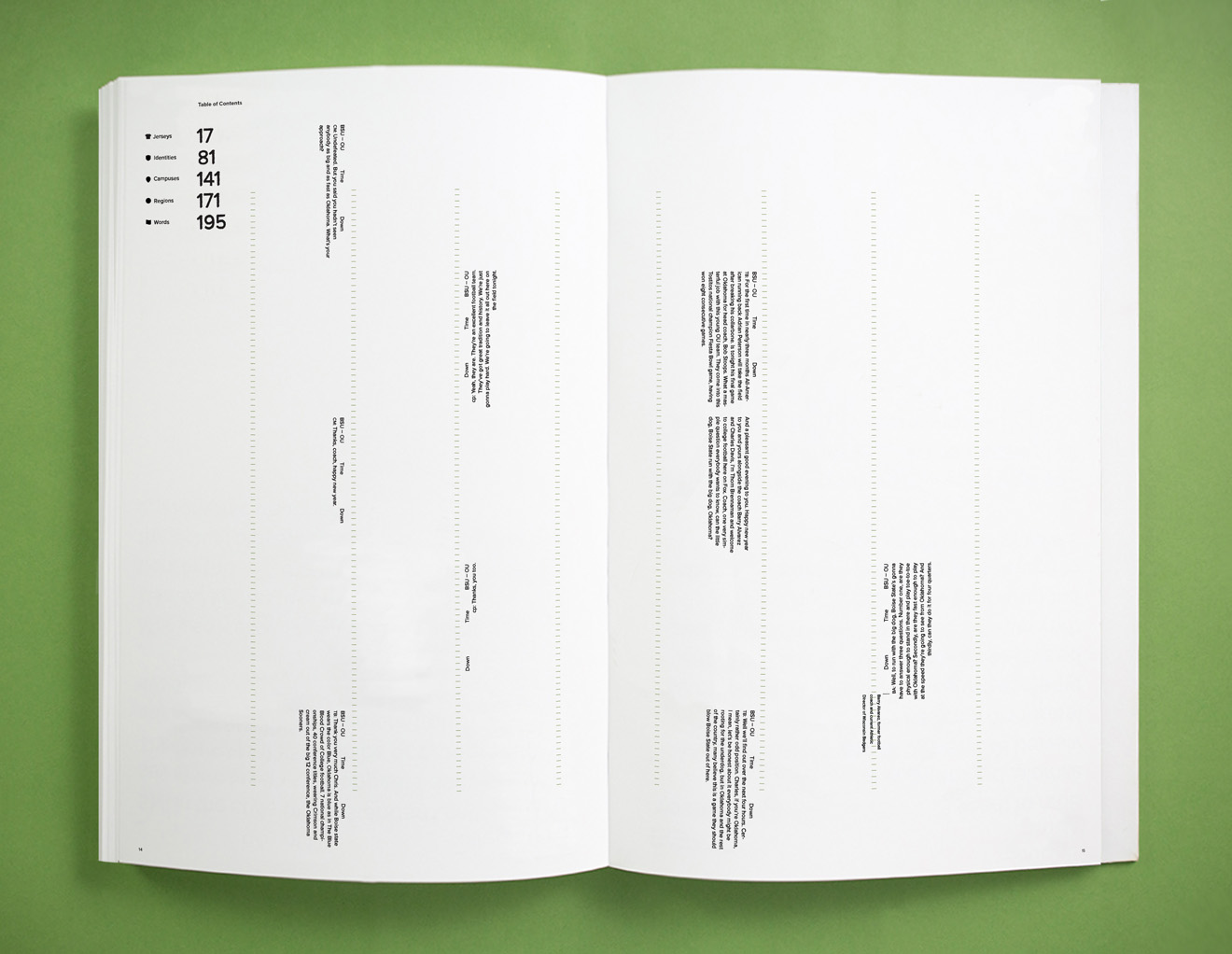 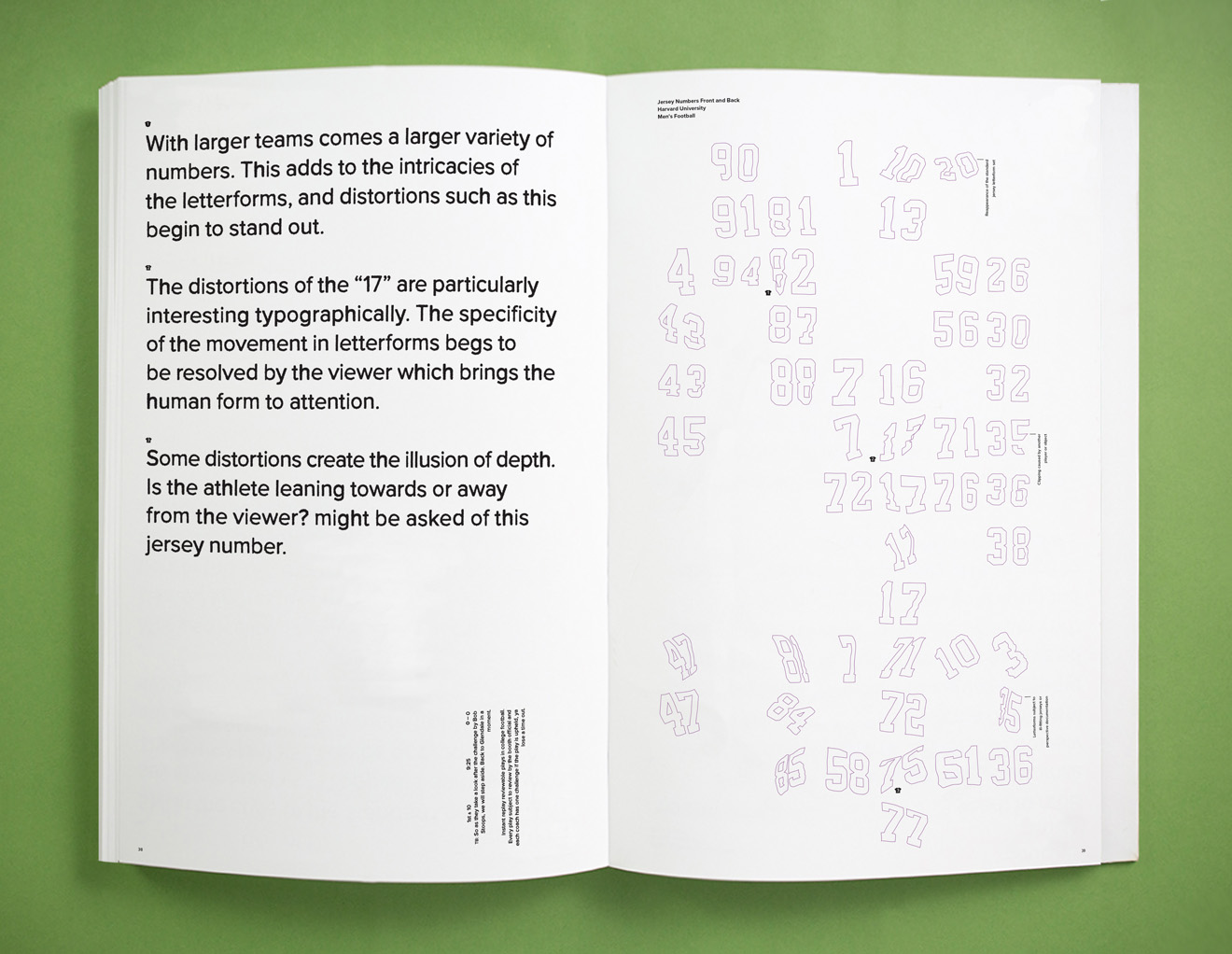 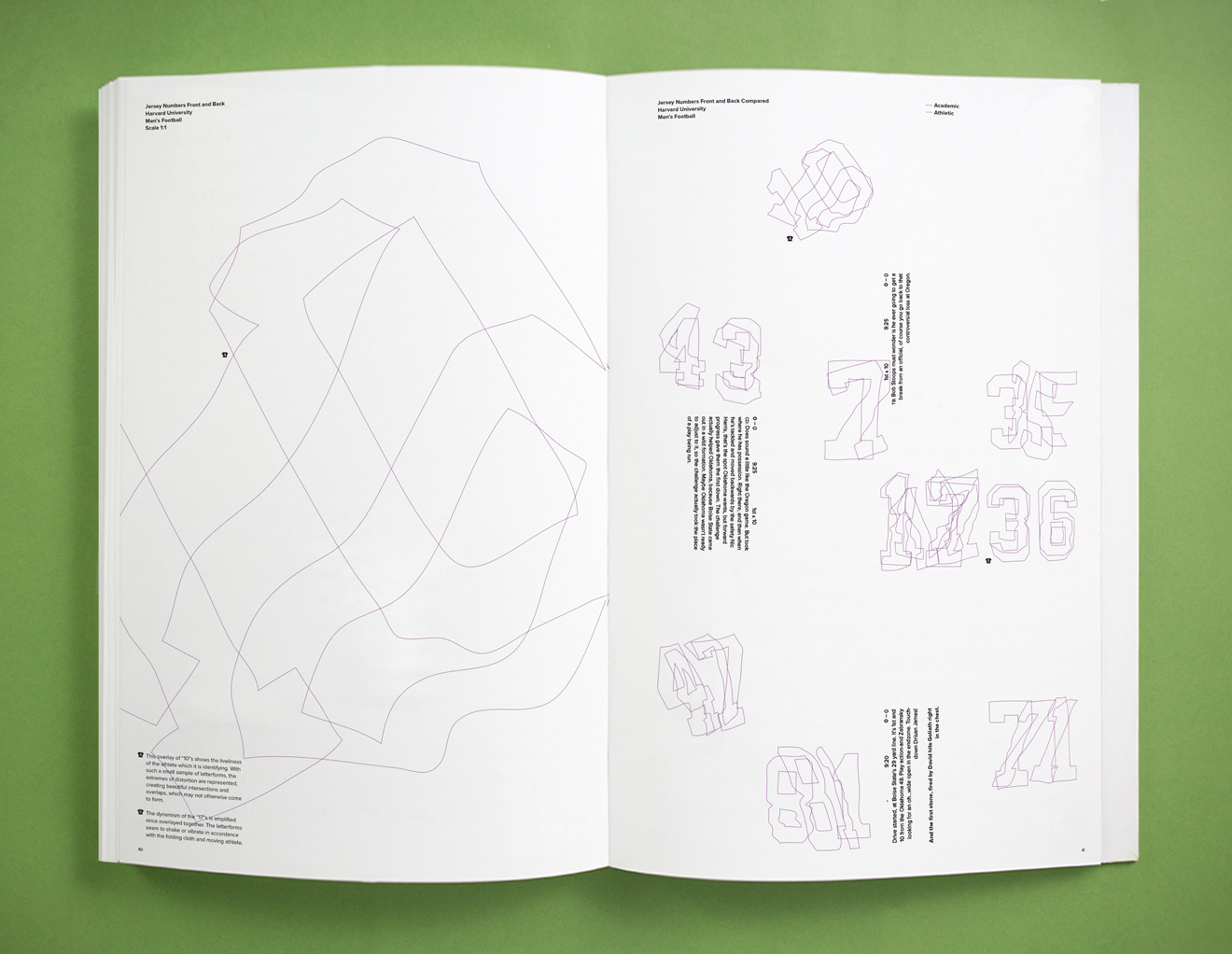 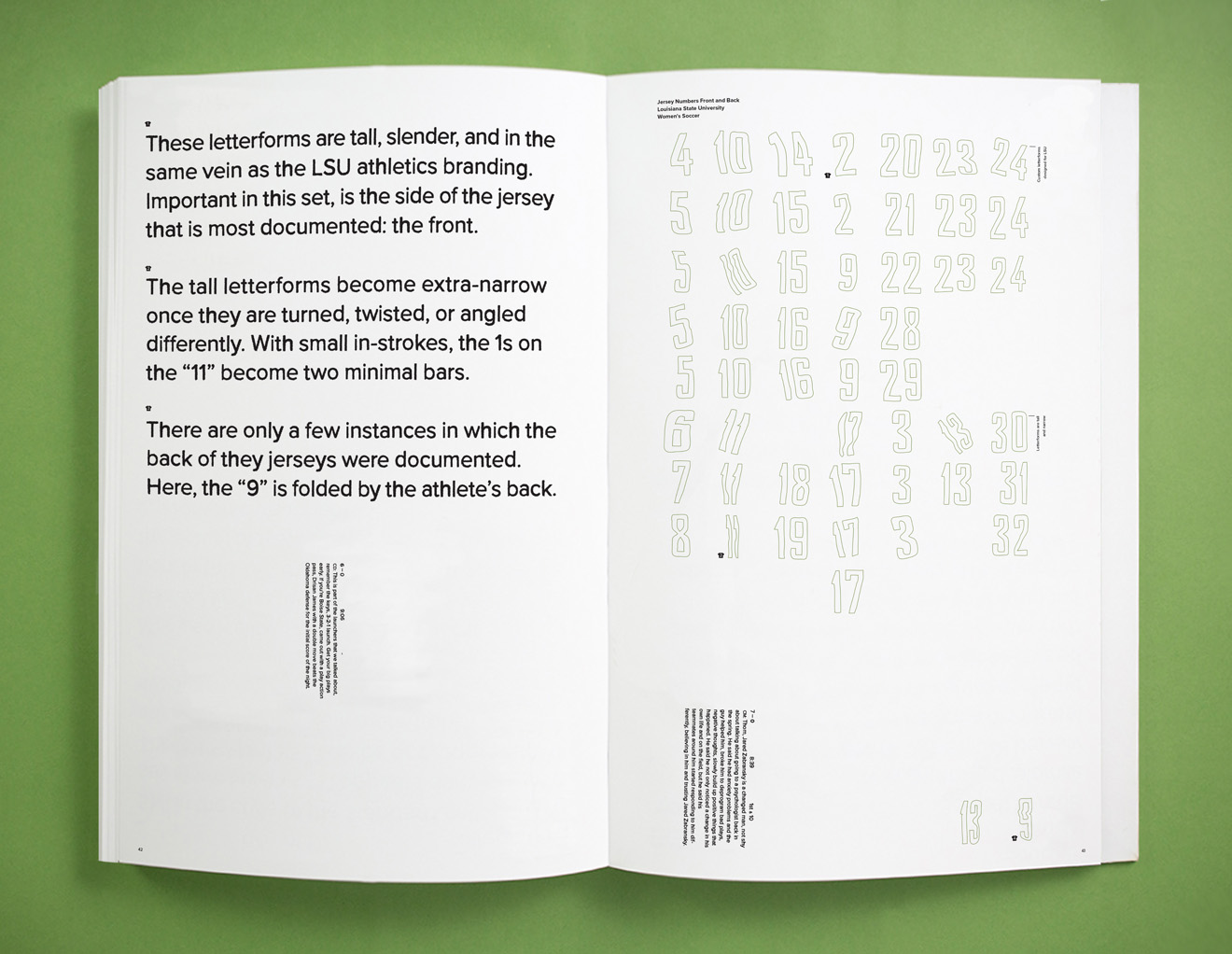 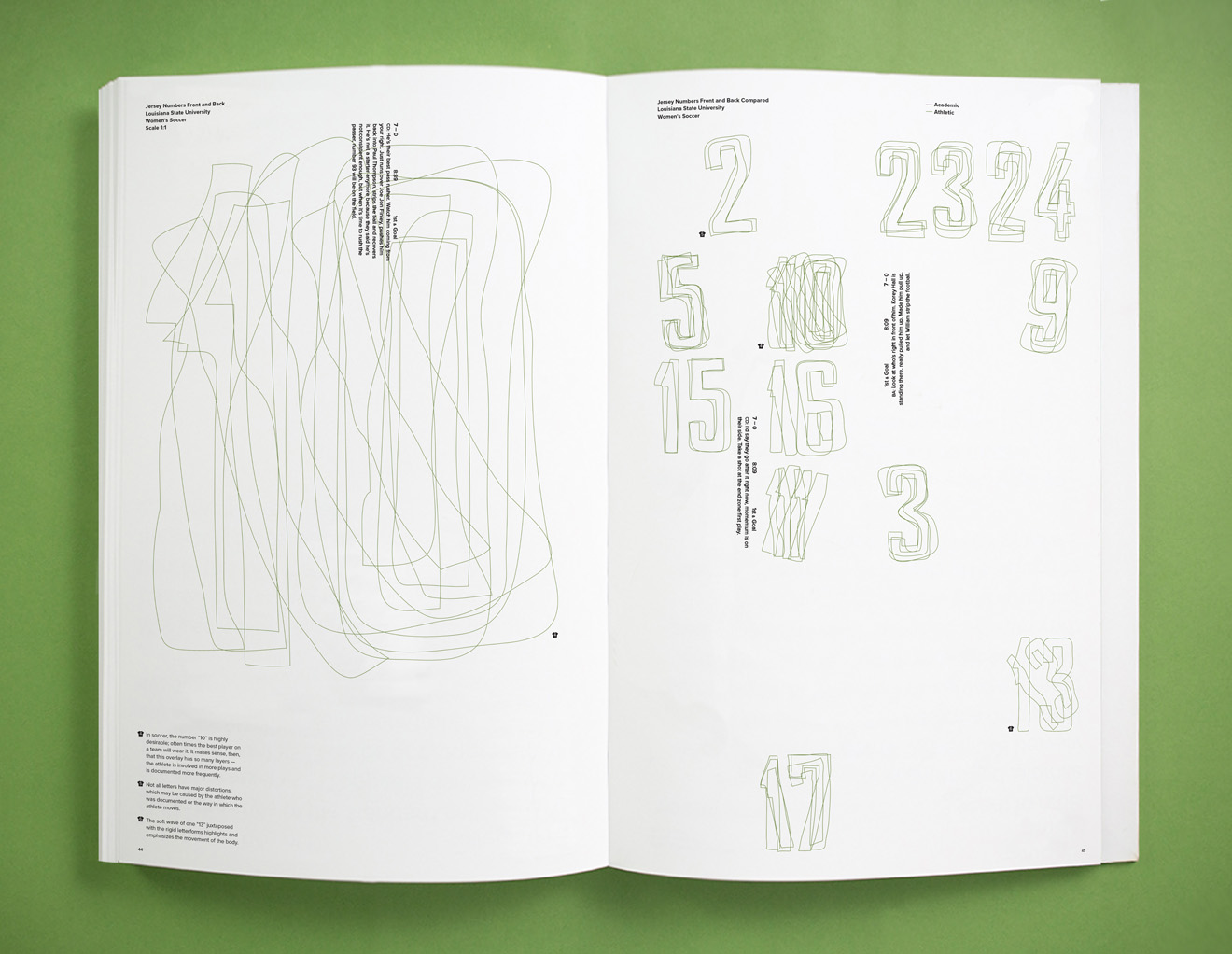 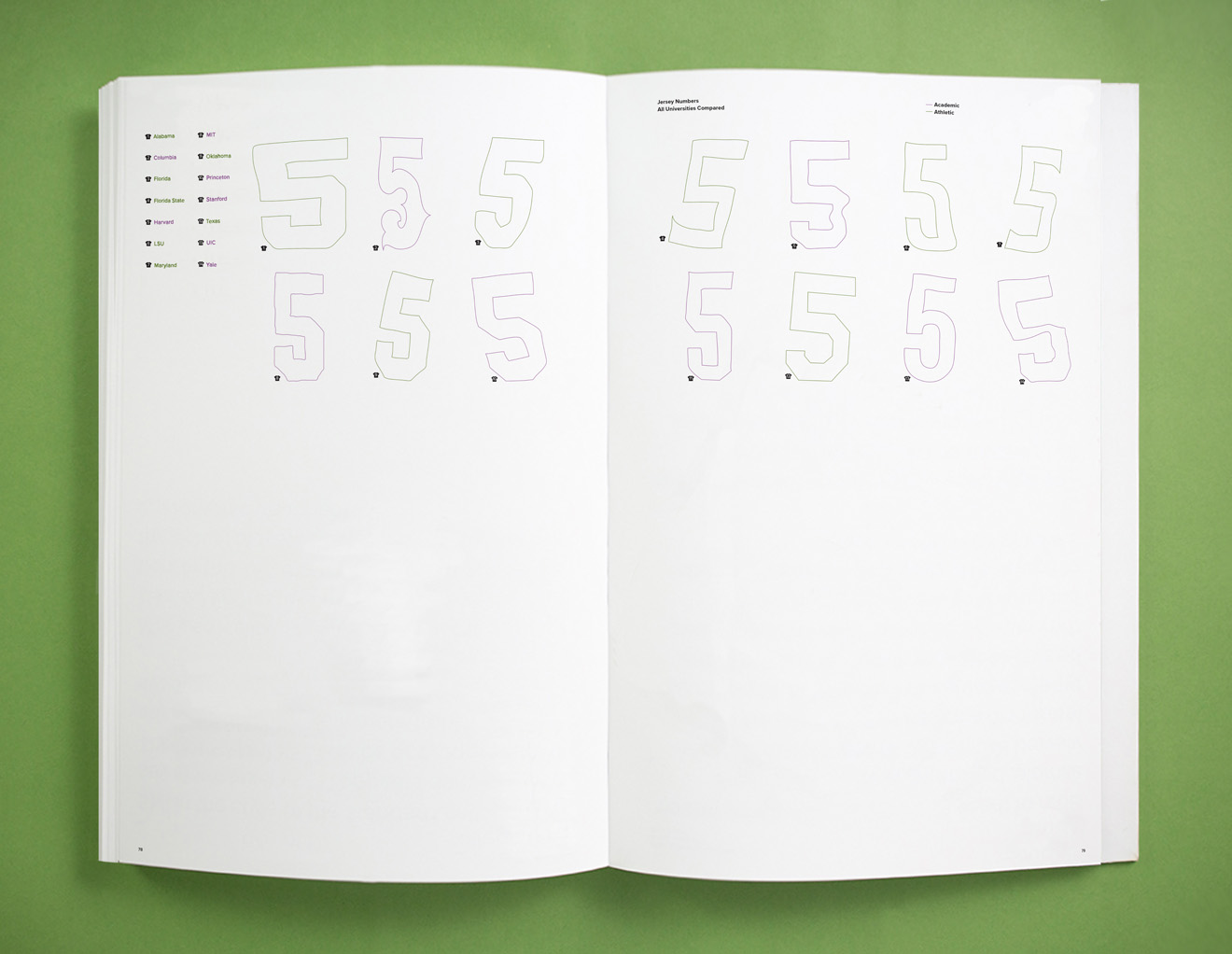 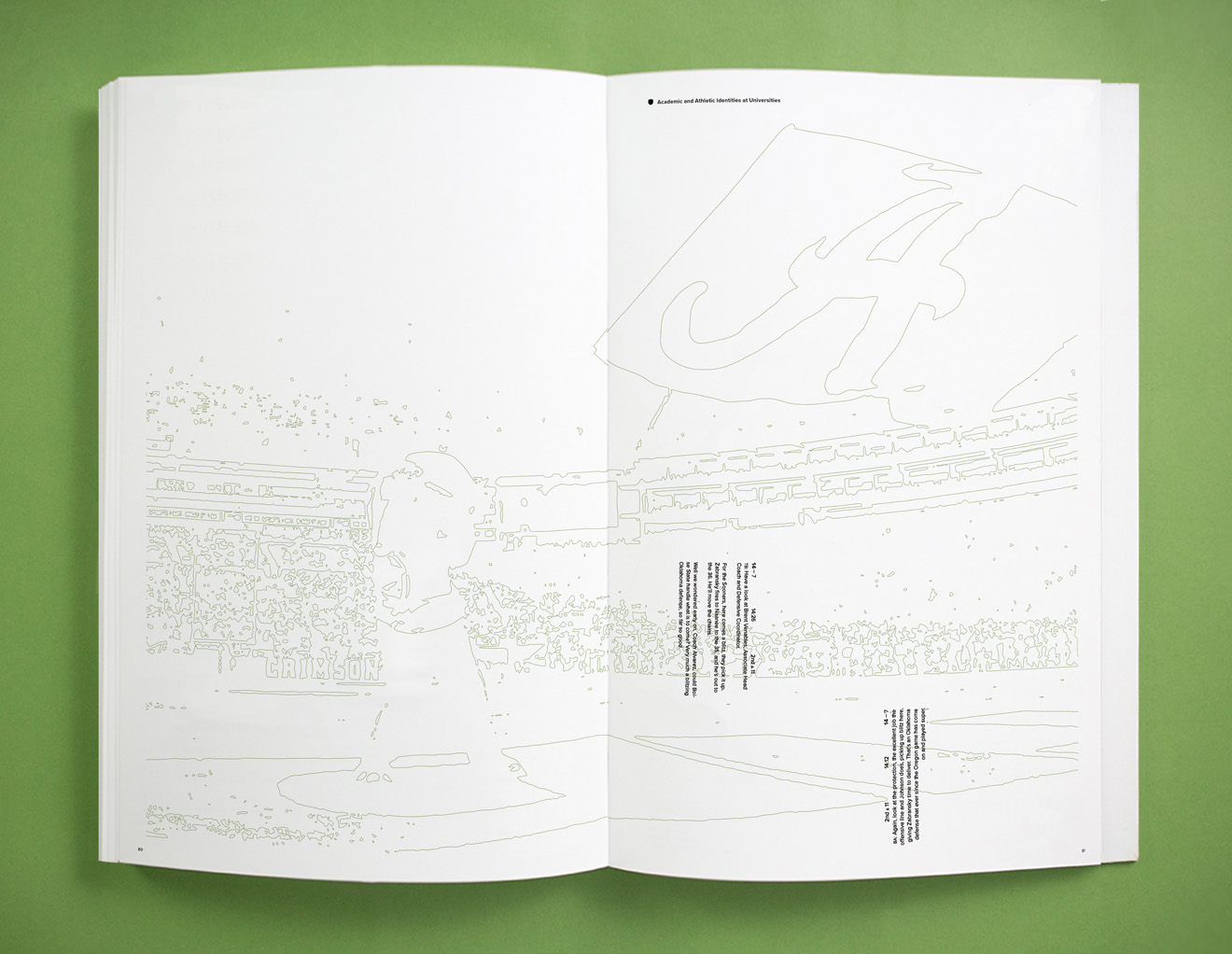 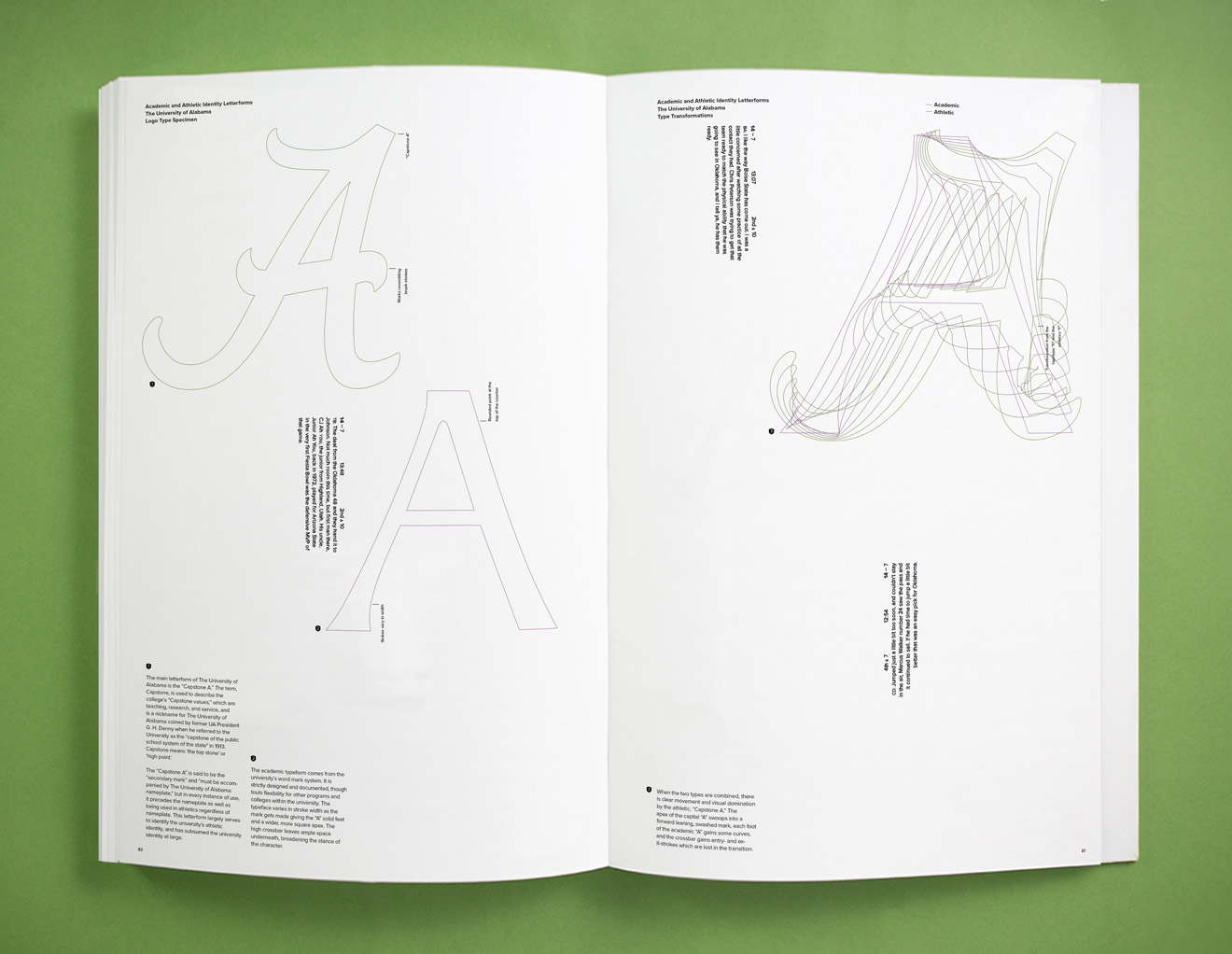 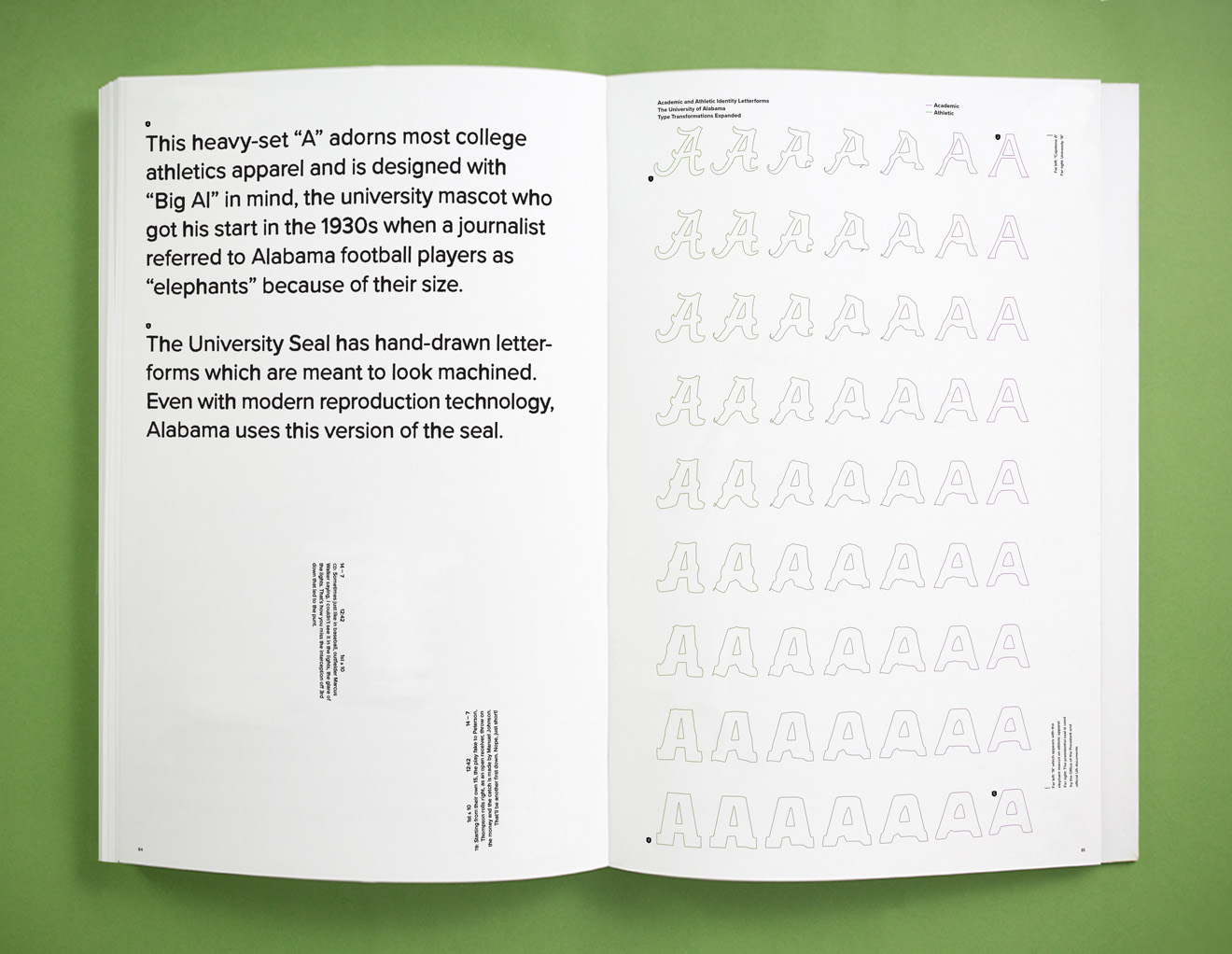 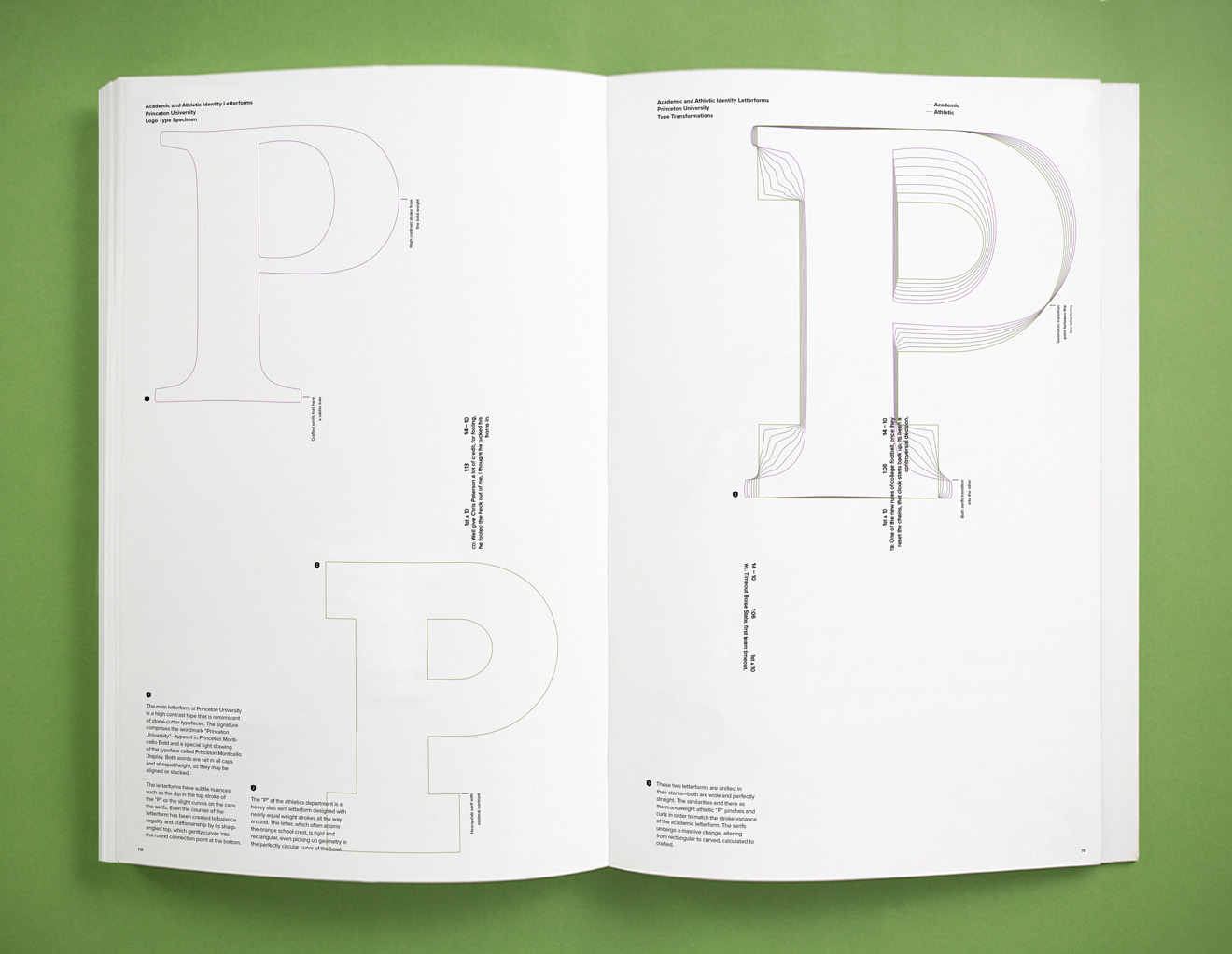 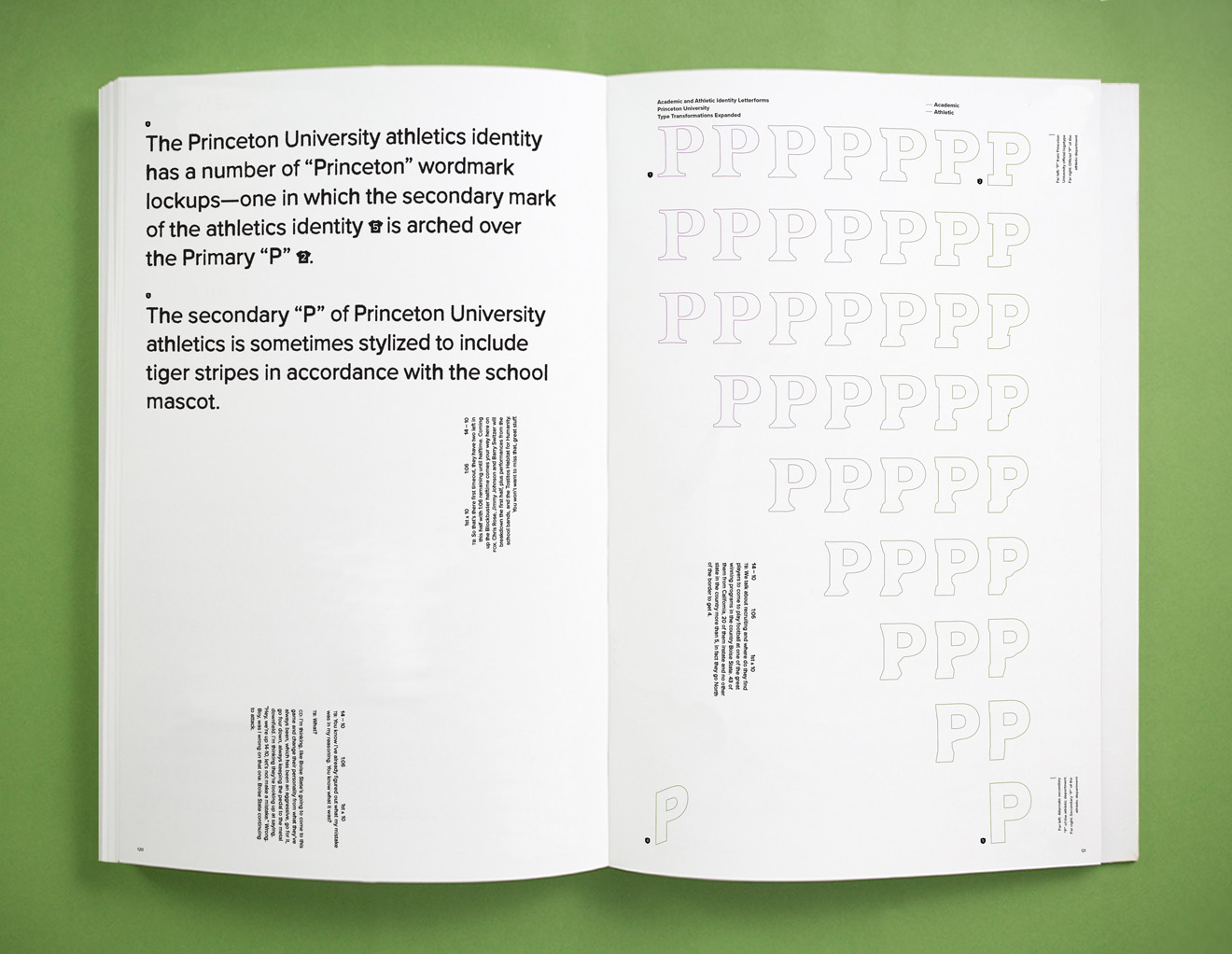 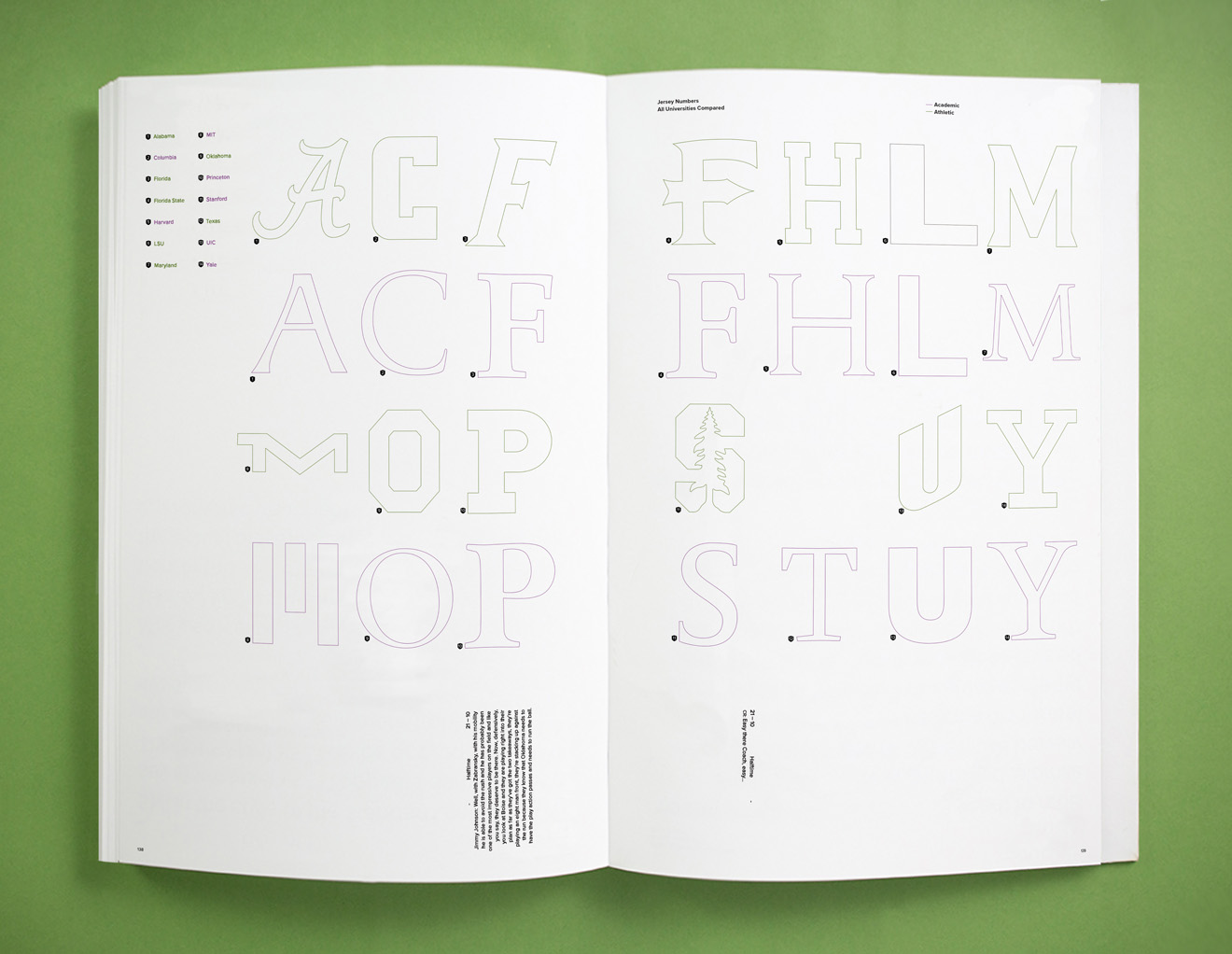 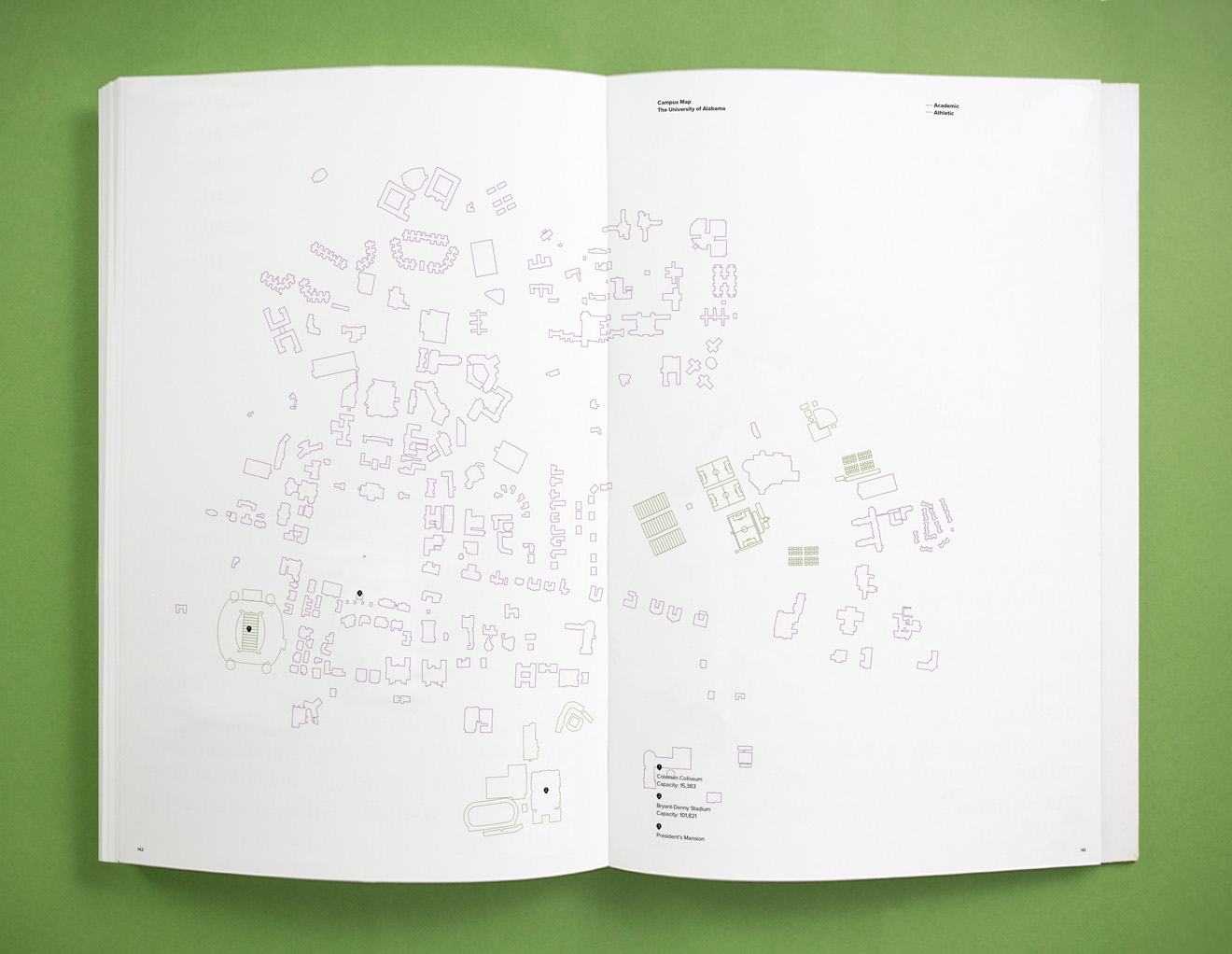 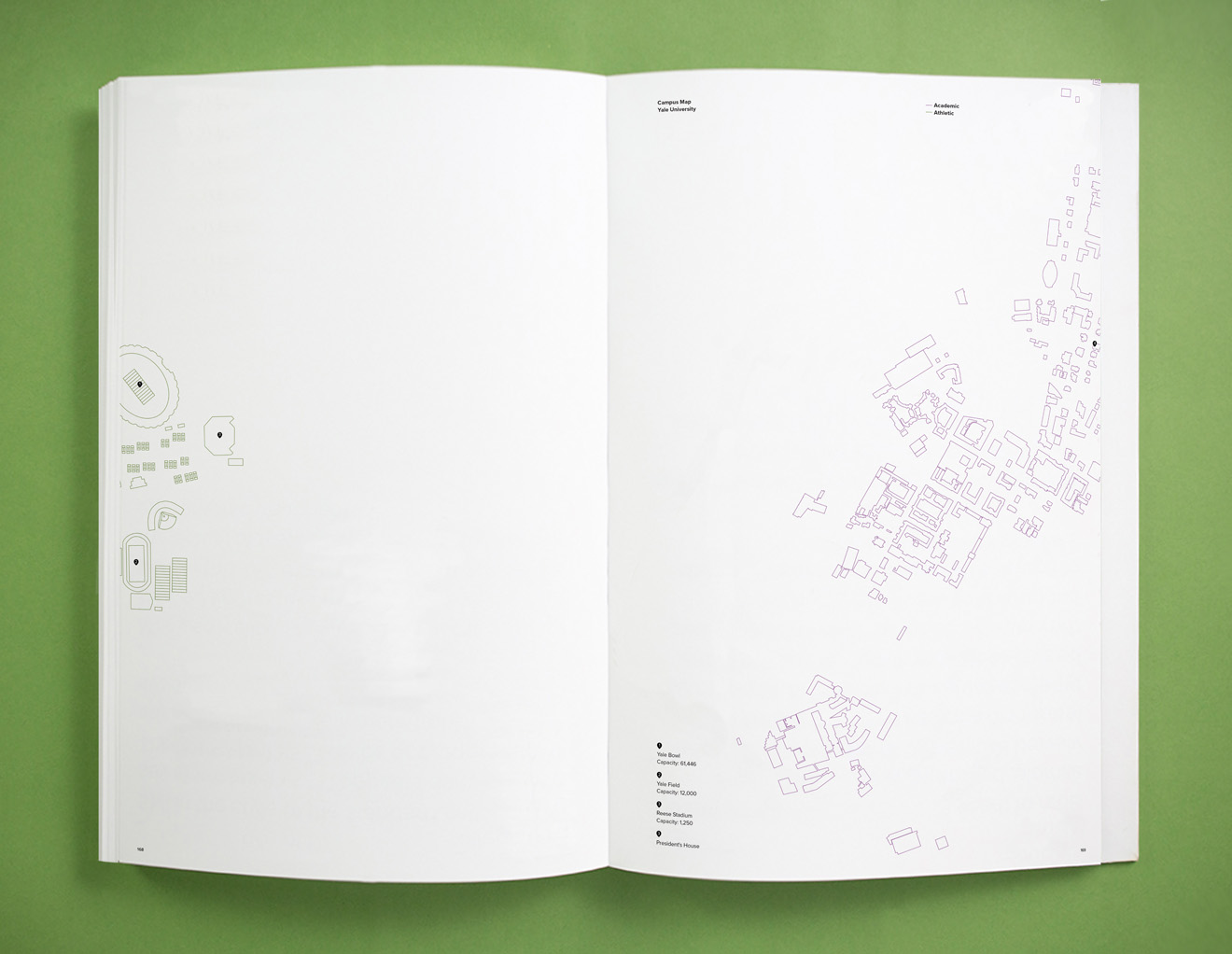 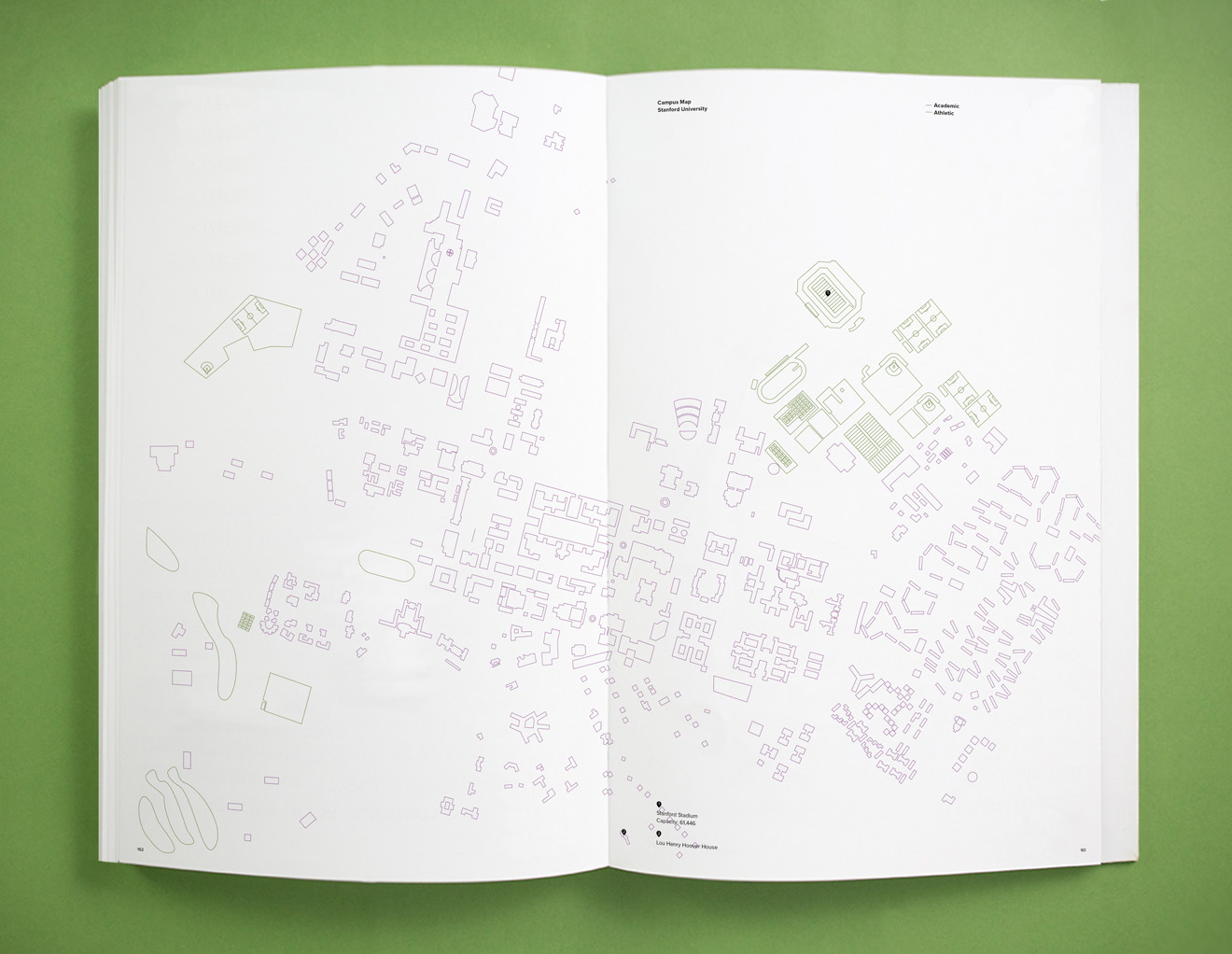 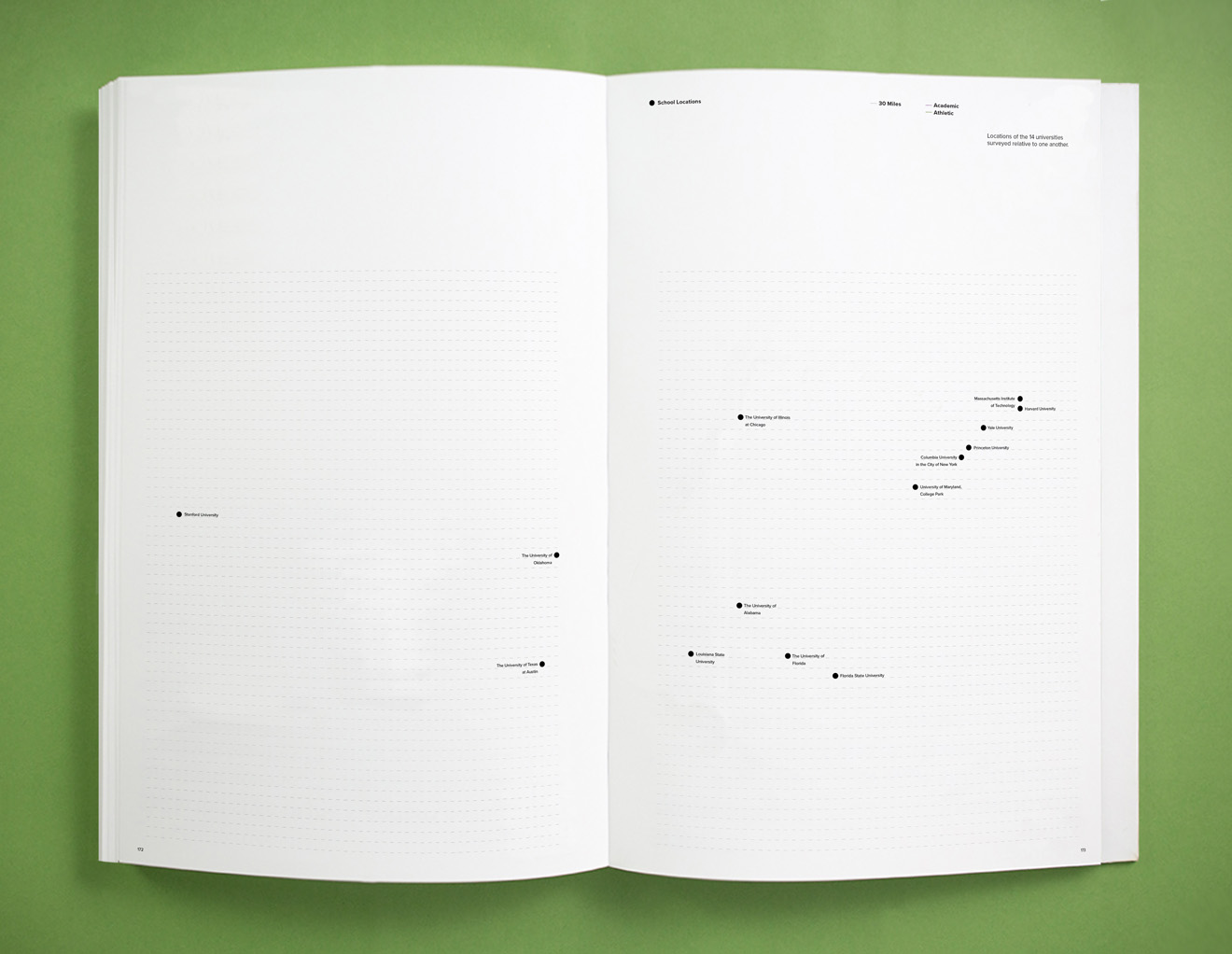 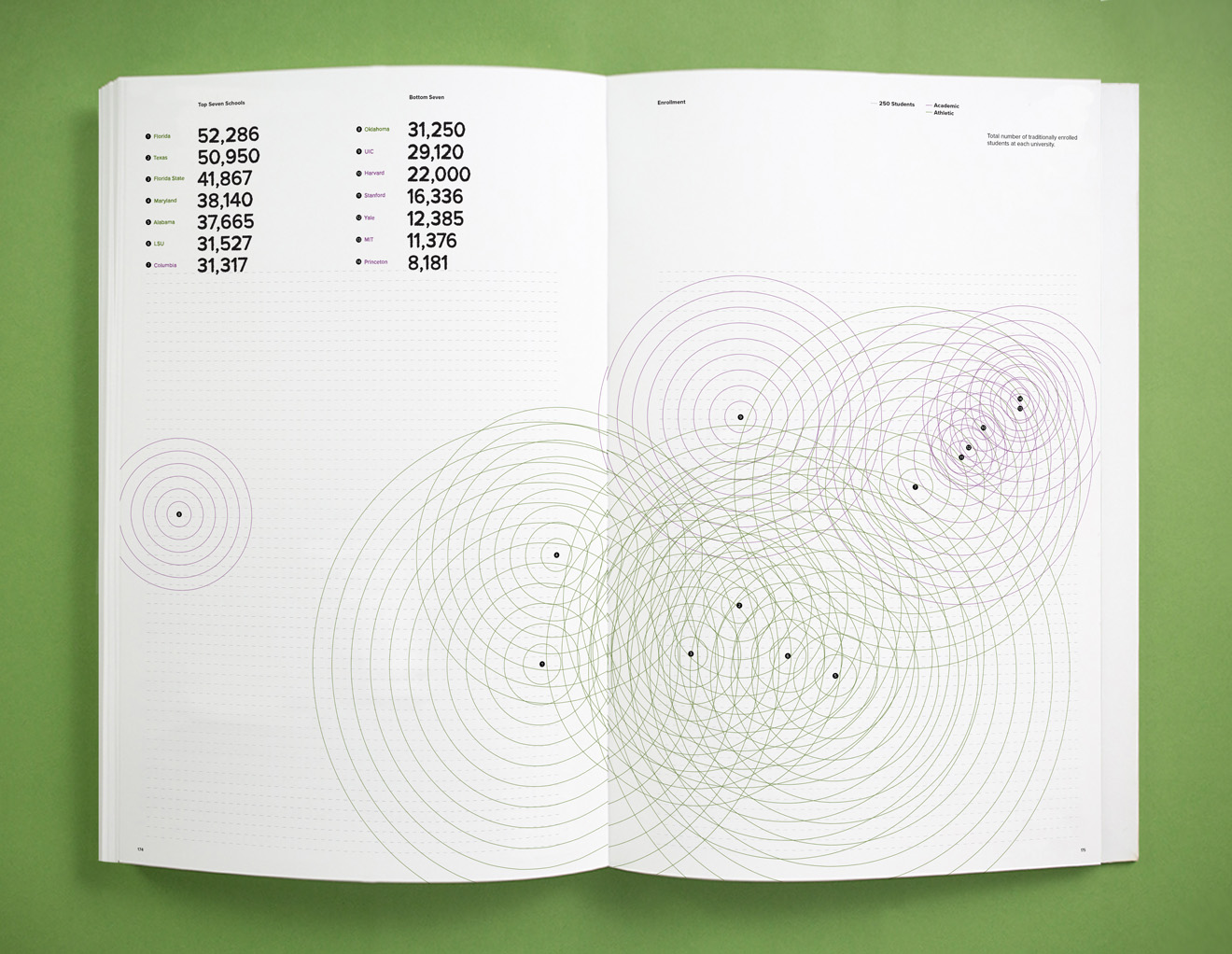 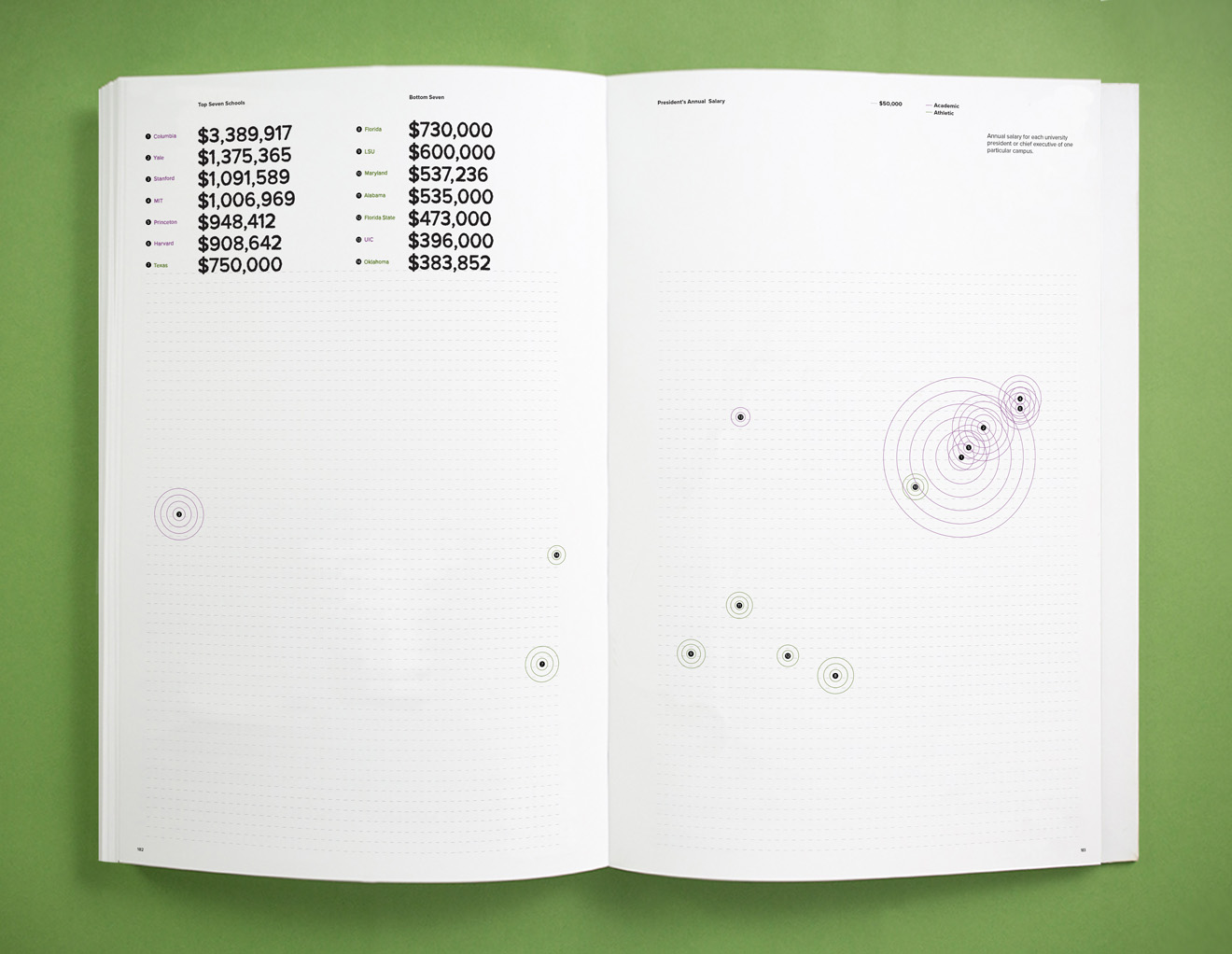 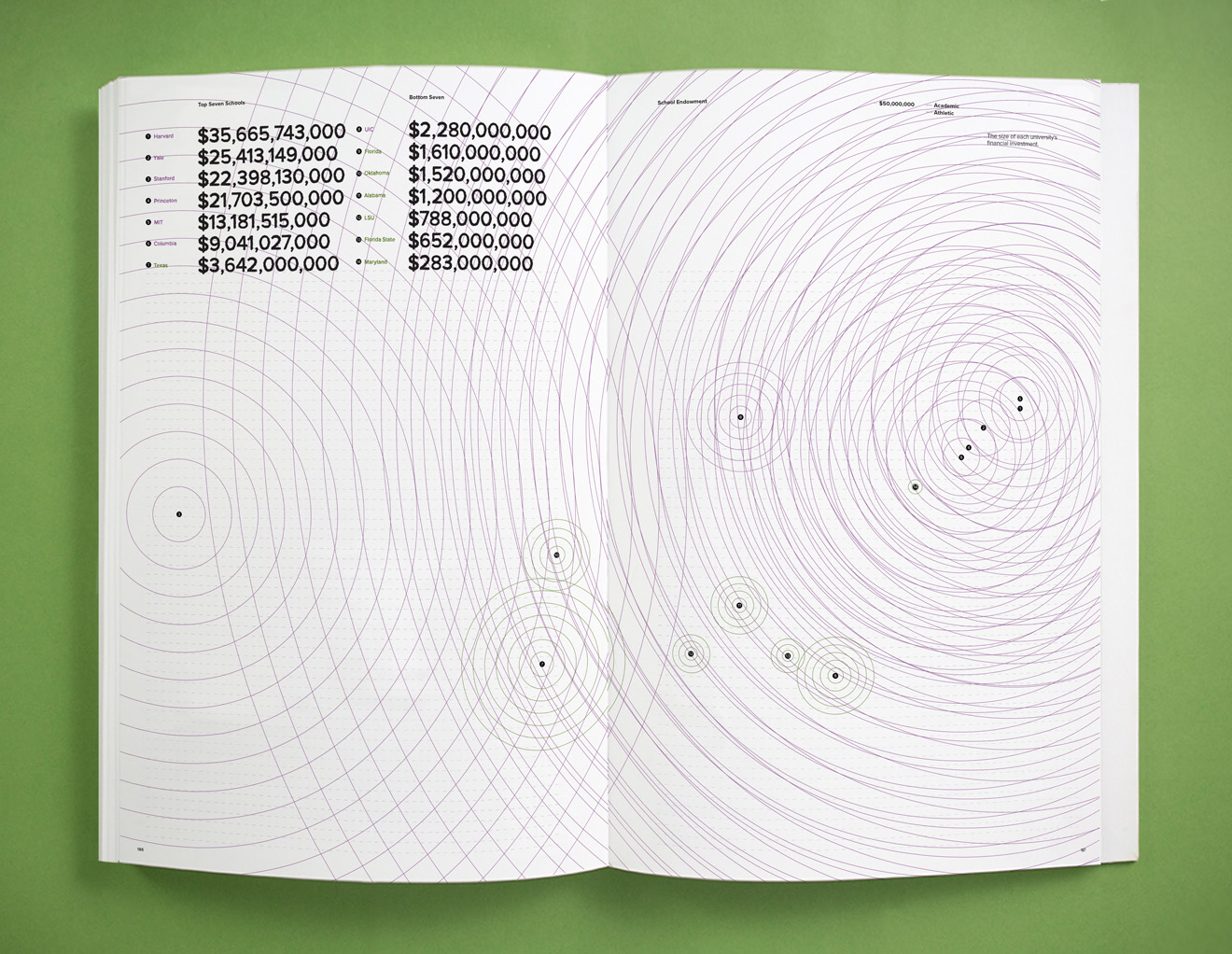 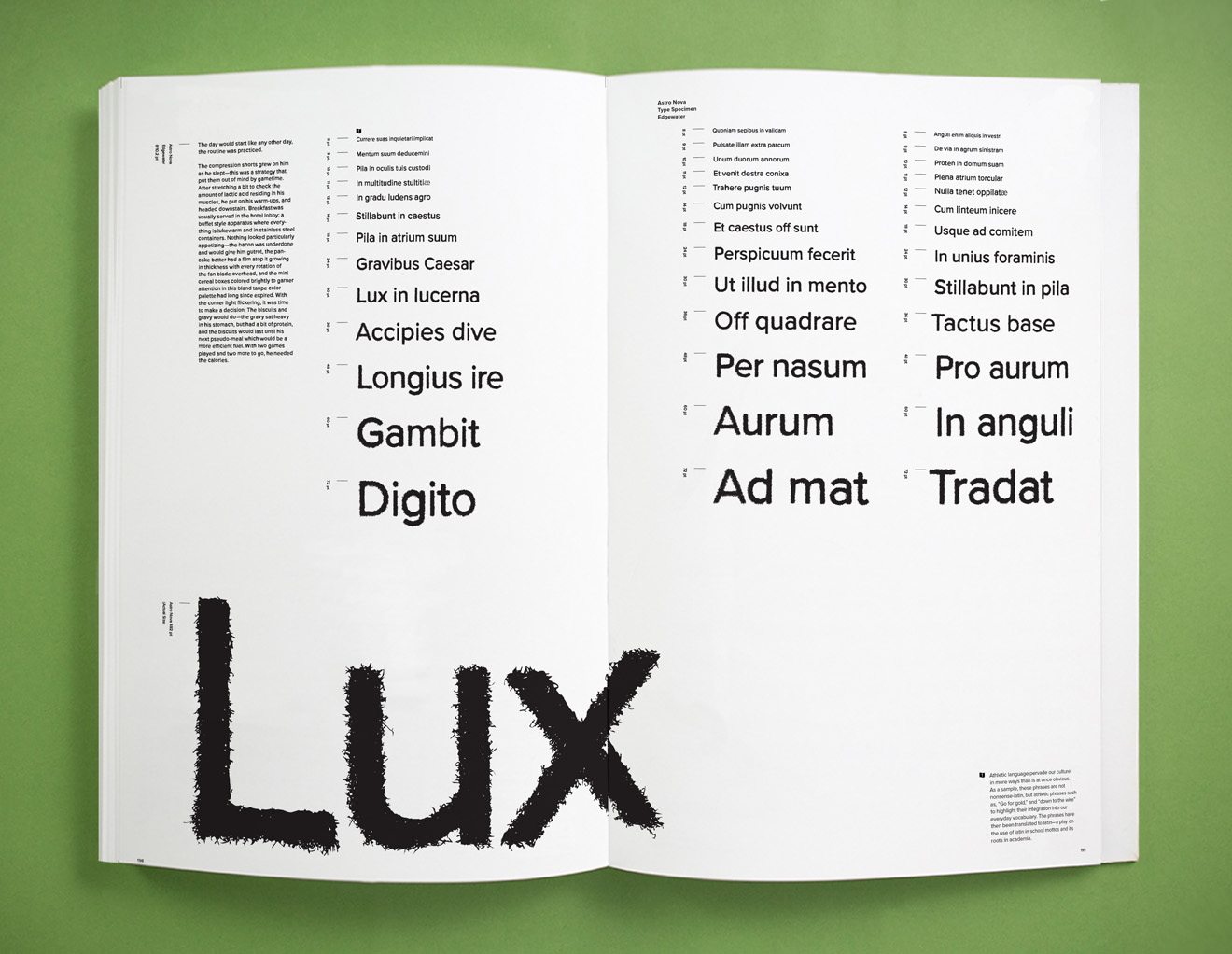 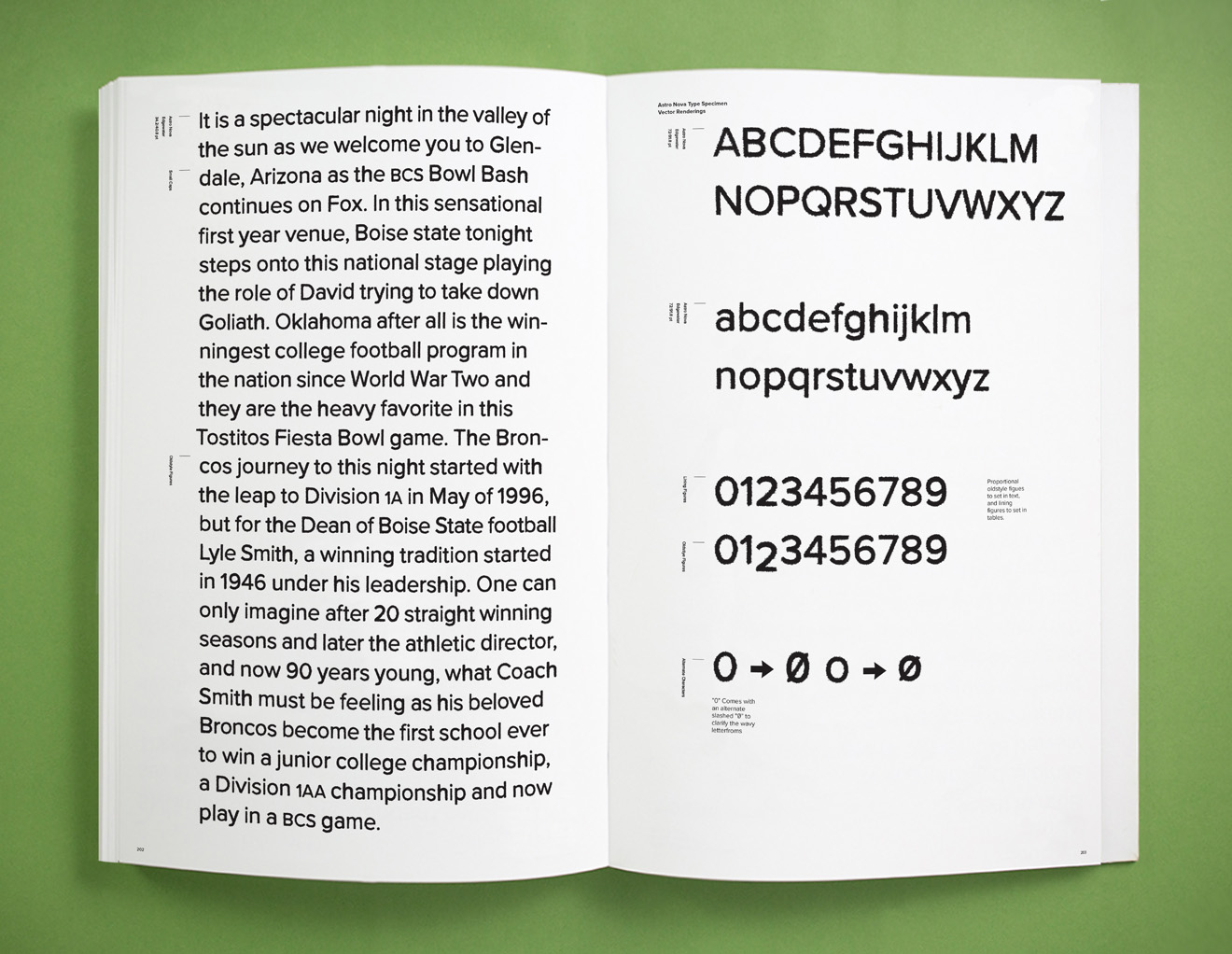