The intention of this kit was to better understand Trinity’s understated identity through the eyes of its stakeholders in order to better design, communicate, and connect with all who encounter the school.
No items found.

The Trinity Identity Discovery Kit was a process of engaging in intimate conversations with a variety of stakeholders at Trinity Christian College in order to guide the design processes that might come to visually govern such a group of people. Over the course of the 2018–2019 academic year,Trinity staff, faculty, students, alumni, donors, and board members were invited to participate in one hour and fifteen minute long guided sessions. The IdentityDiscovery Kit, represented on the following three pages, took place in three segments. Each participant completed one segment before coming together as a group, two to six people, to discuss their answers, revelations, excitement, worries, and experiences. The group continued this trend through all three segments before ending with a closing discussion.

This publication is the culmination of the research completed. Over 50 participants entered into this process. Not all entries made it into this publication—some participants were given abbreviated kits or invested too much time in earlier segments and were unable to complete all the segments due to the time constraints of a bustling institution. In all circumstances, however, the responses were thoughtful and not without deep consideration—a great strength of Trinity.

These conversations were carefully guided, yet were open to the emotional outbursts inherent in human interaction—though this publication captures everything written down by participants, only in moments does it capture the passion, love, fears, and hopes that Trinity’s stakeholders have for their beloved institution. Many annotations were able to be captured, and many conversations will have been lost in this text, but remembered by its constituents.Such is the nature of qualitative research.

Notes in the Book

There are a few notes on how this publication came together. In the first section, people who chose to be named are listed, and those who chose to remain anonymous have been left as such, represented by x and a number with no significance. No question in section One asks what a person's role is to one, help anonymize participants when necessary, and two, because the majority of participants were at one point students themselves and thus hold many roles in relation to the institution—another great strength of Trinity.

In section Two, participants were given physical props to aid and guide the process.The card sorts mentioned on pages40–41 were distributed in carefully built wooden boxes mirroring their private nature while the word blocks mentioned on pages 56–57 were small acrylic tiles in two shades of blue, represented in ink on that page, and were distributed in a ceramic bowl to encourage playfulness.These physical structures aren’t represented in this publication as its main purpose is to put participants’ answers on display, though their method is important.

Section Three asked participants to color and draw using unmarked crayons. In the case of colors, some participants chose only to name a color, in which case the color displayed is a generalization. The circles in section three attempt to concisely capture the tone with which participants chose color—annotating one or many, outlining, blending, etc. In the case of the drawing portions, participants chose a variety of color, which in some cases annotated through metaphor and graphic difference different groups of people, departments, ideas, or other. Unfortunately, given the scale of reproduction, many colors would have been lost, thus all drawings have been treated equally and their collective voice raised together.

Trinity Christian College is a four-year liberal arts college located in Palos Heights, Illinois, which is 20 miles southwest of Chicago. Trinity provides students with an excellent Christian higher education in the Reformed tradition. The college serves both traditional and adult learners through its programs.

Year
Type
Publication
Oops! We may not have submitted this work to any notable publications.
No items found.
"This kit includes various pieces that are intended to get you thinking about your experience working, guiding, and cultivating Trinity." 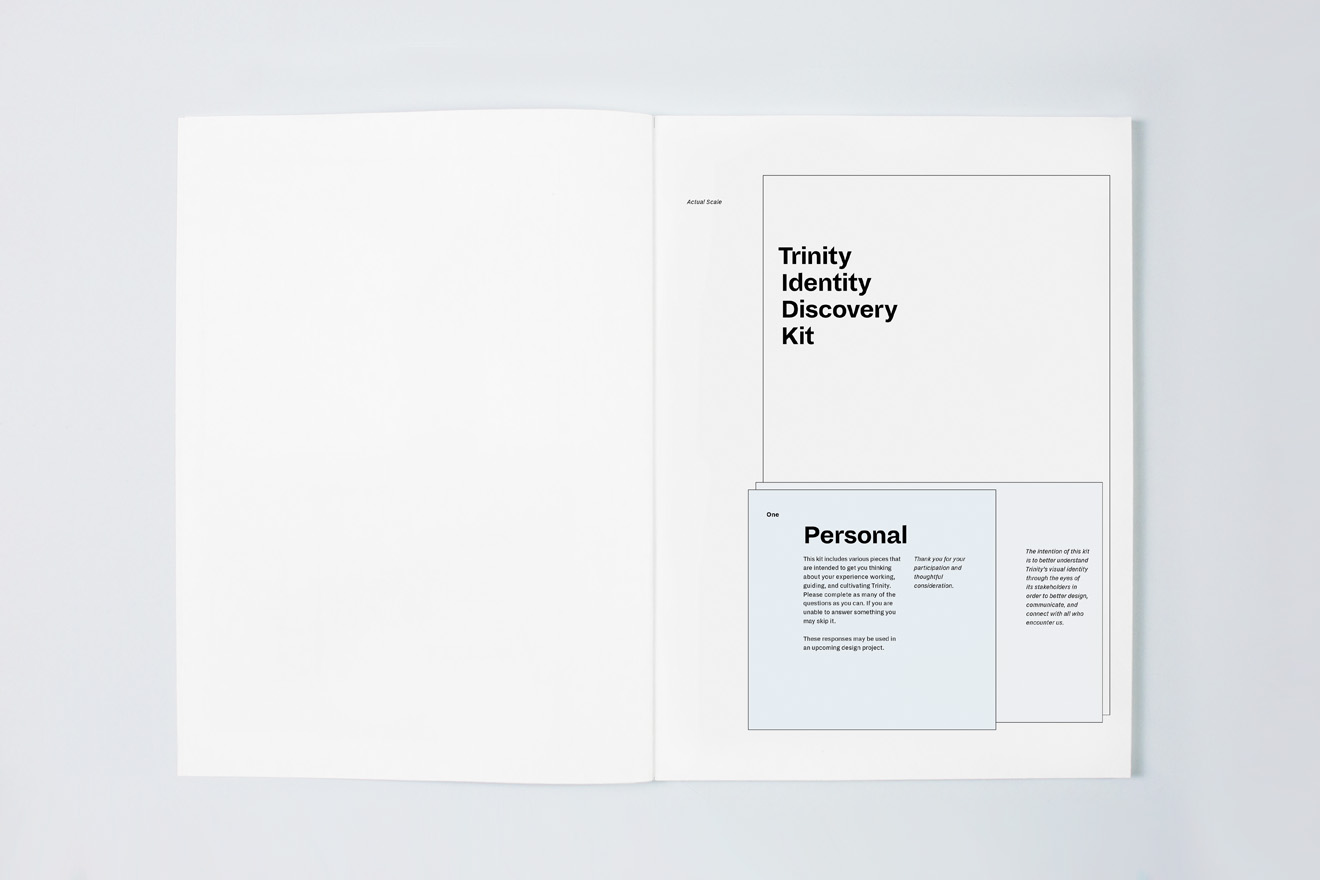 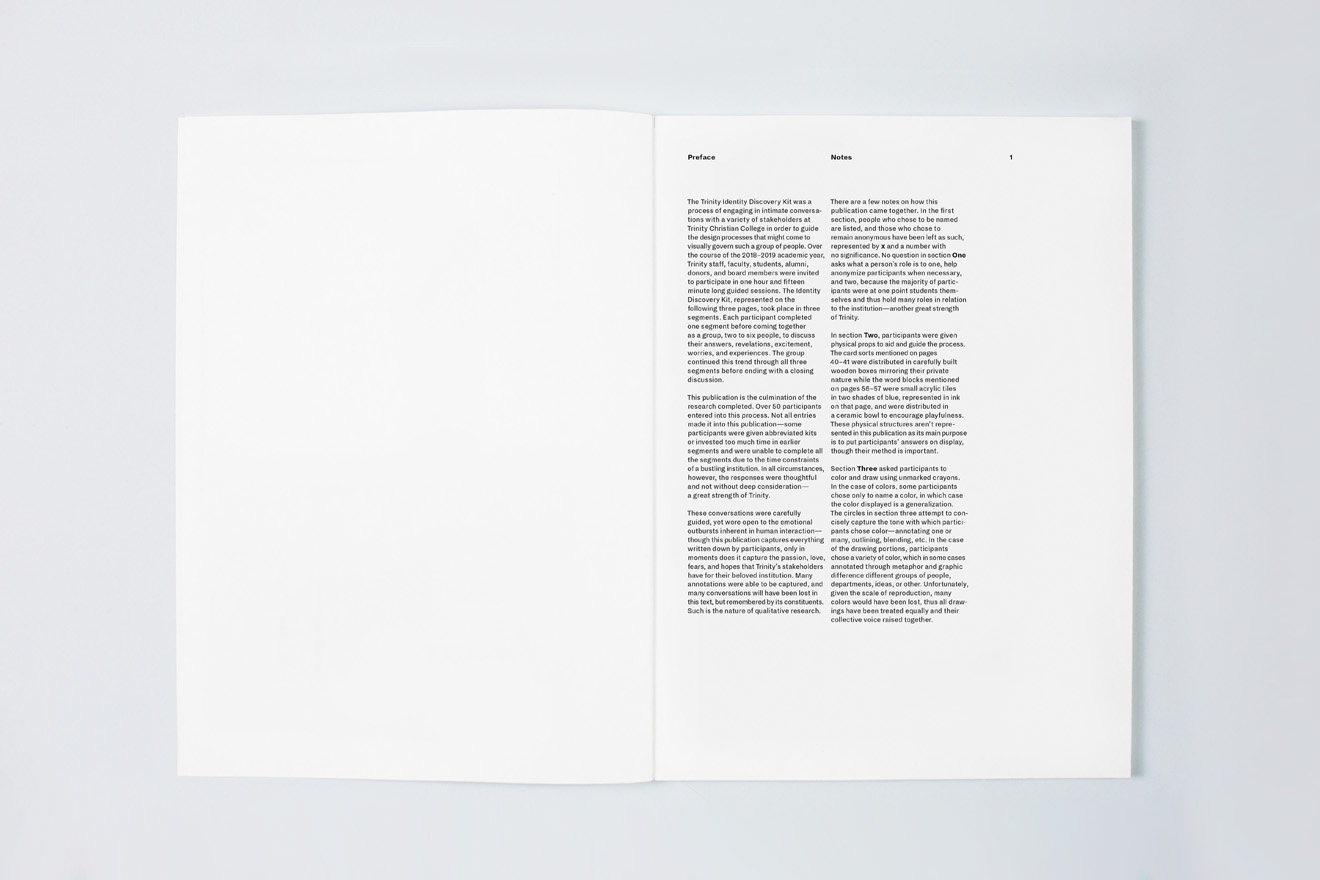 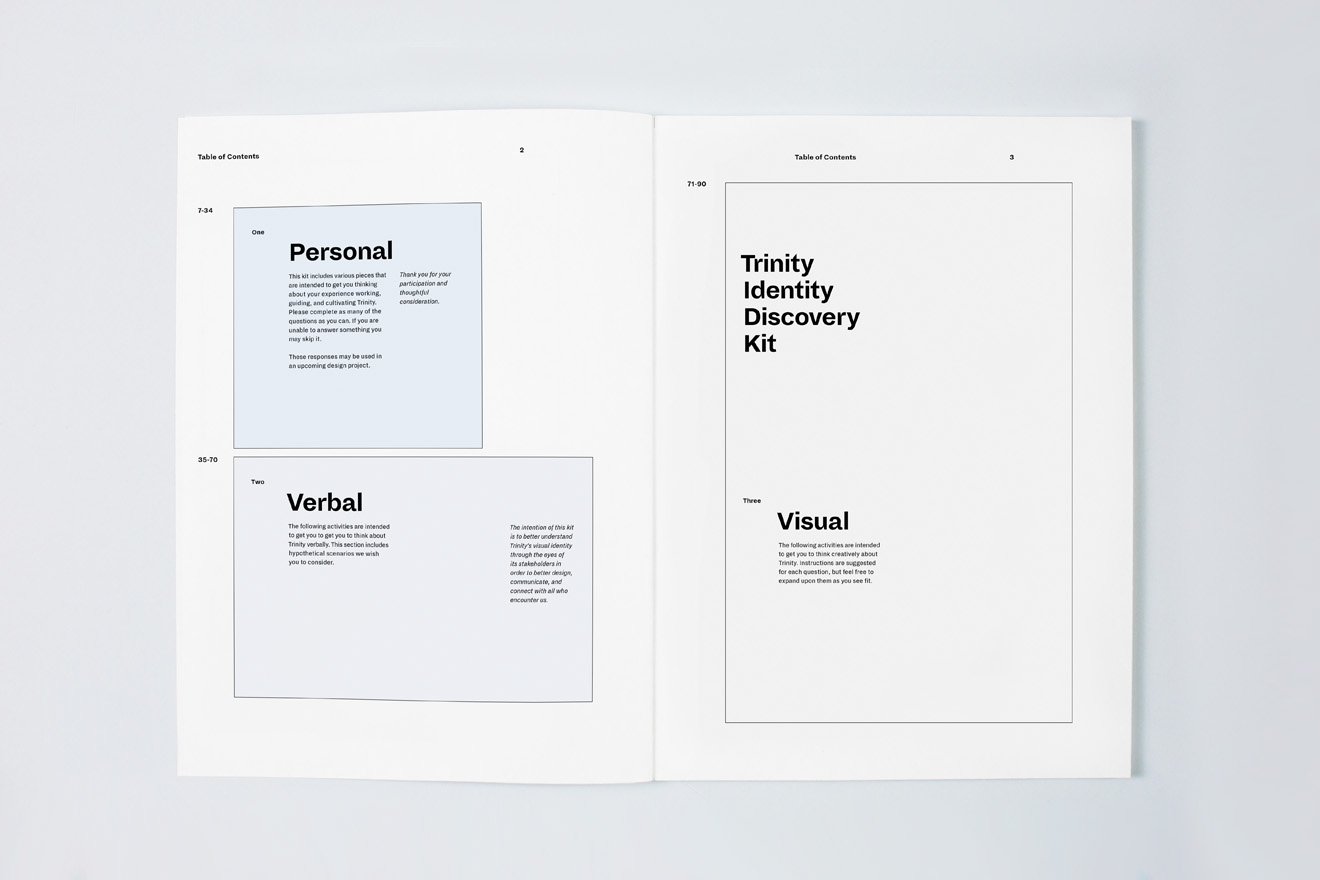 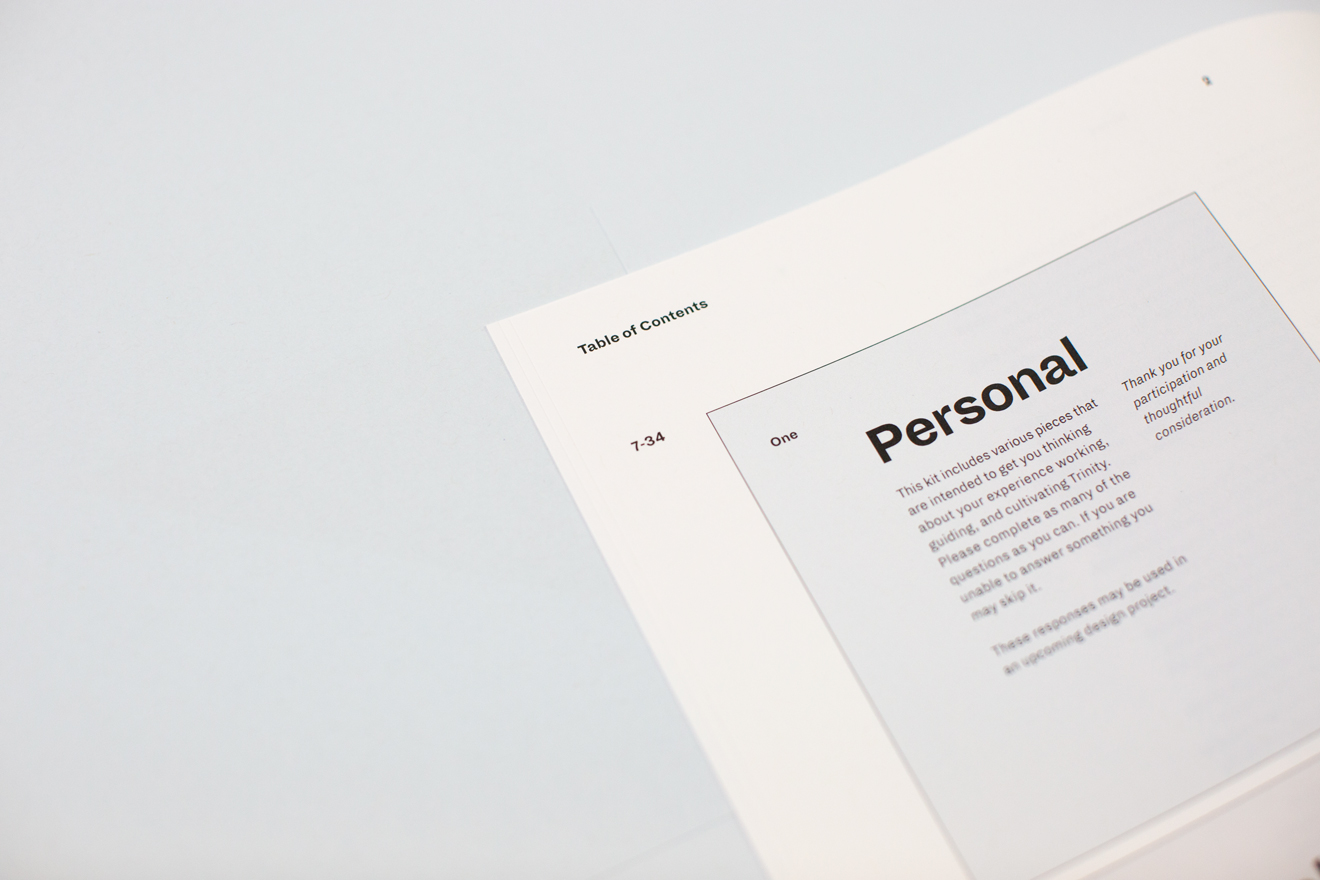 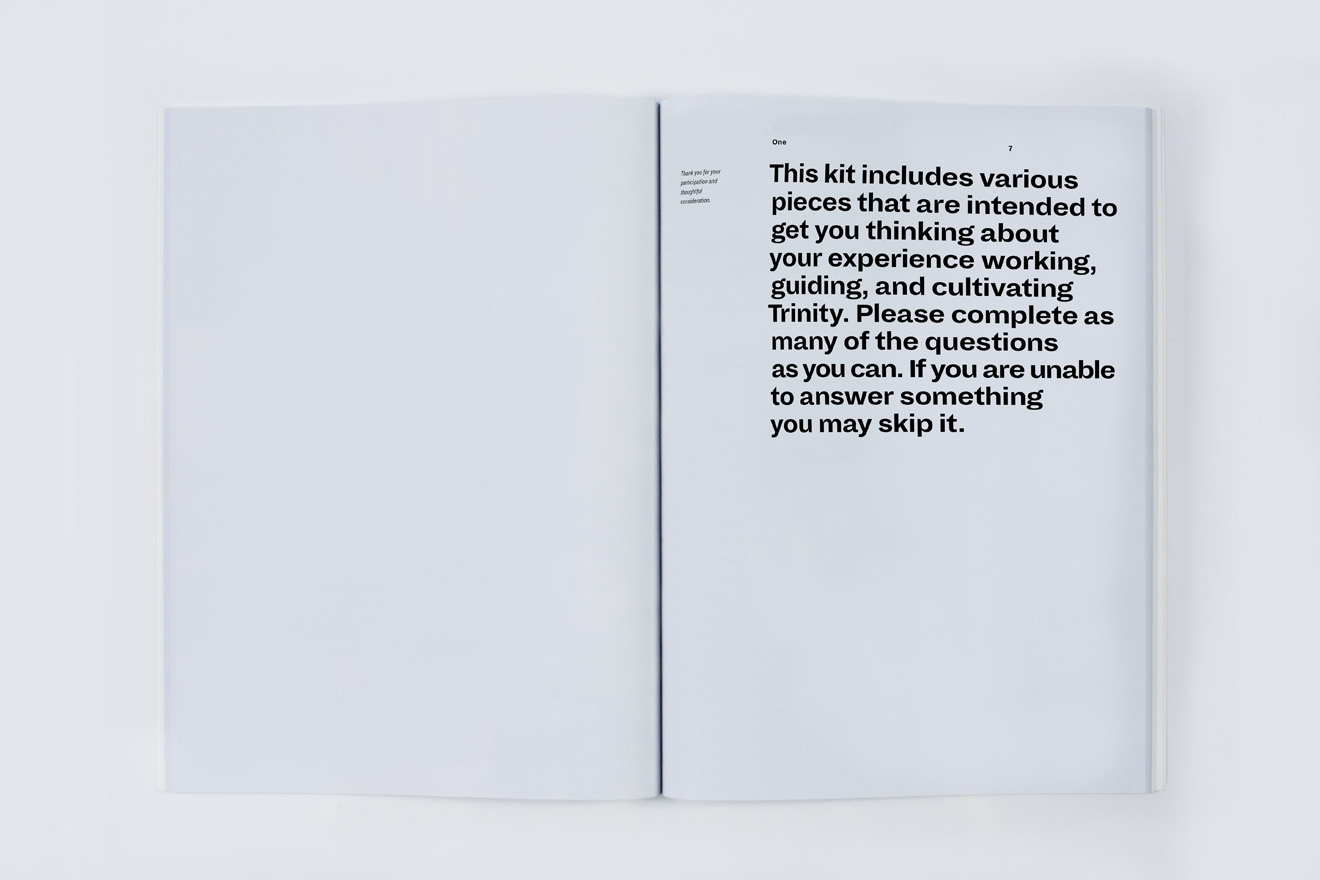 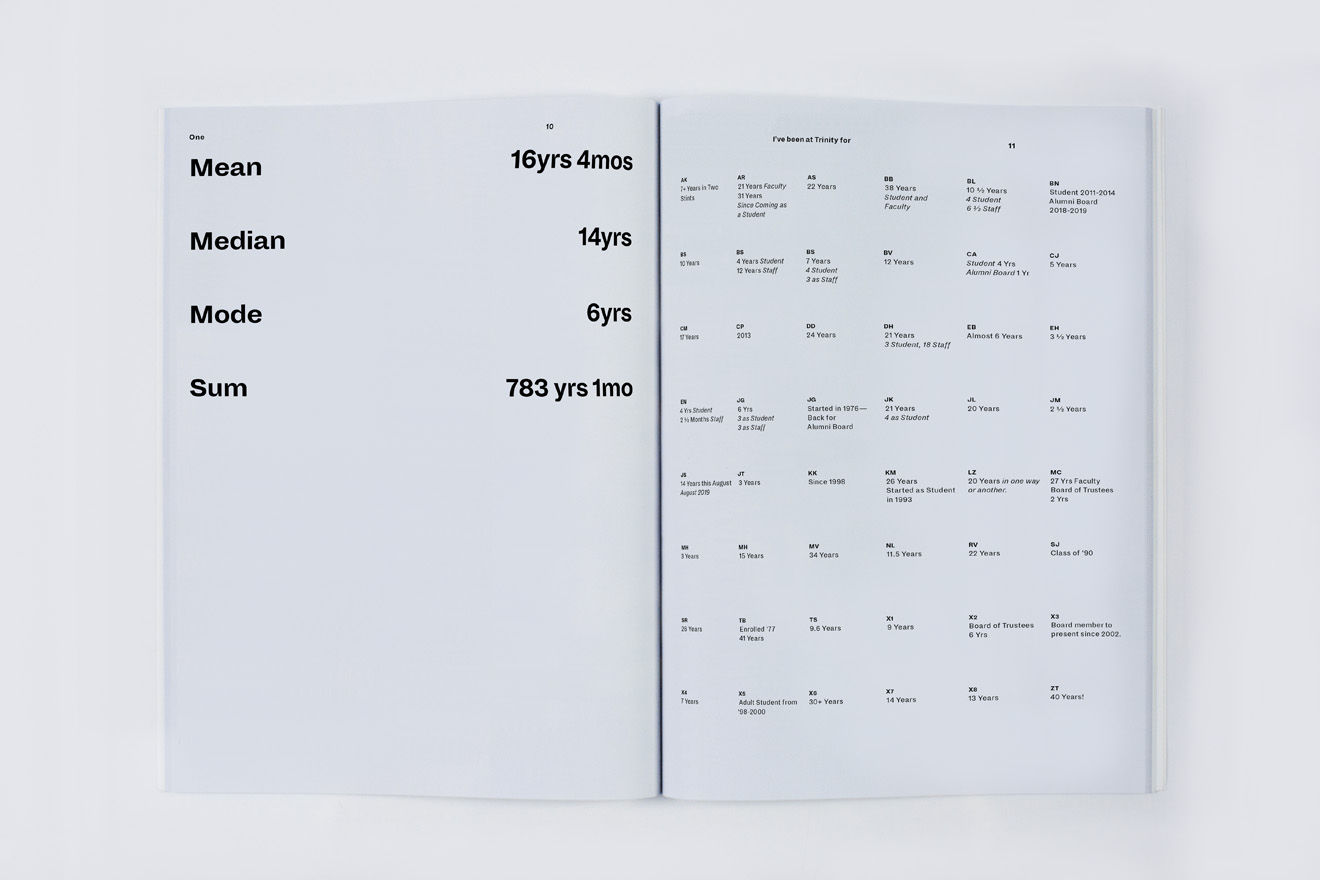 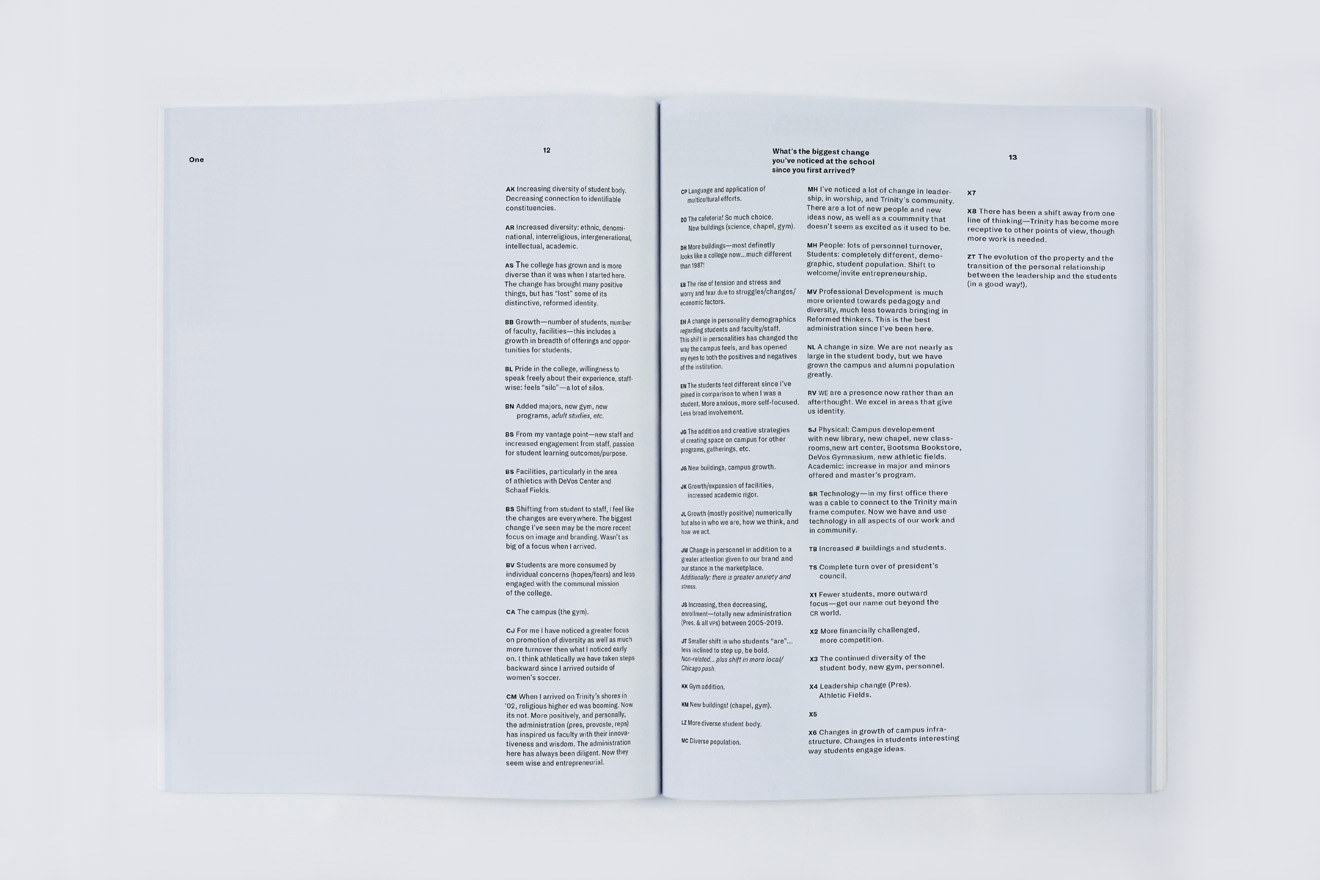 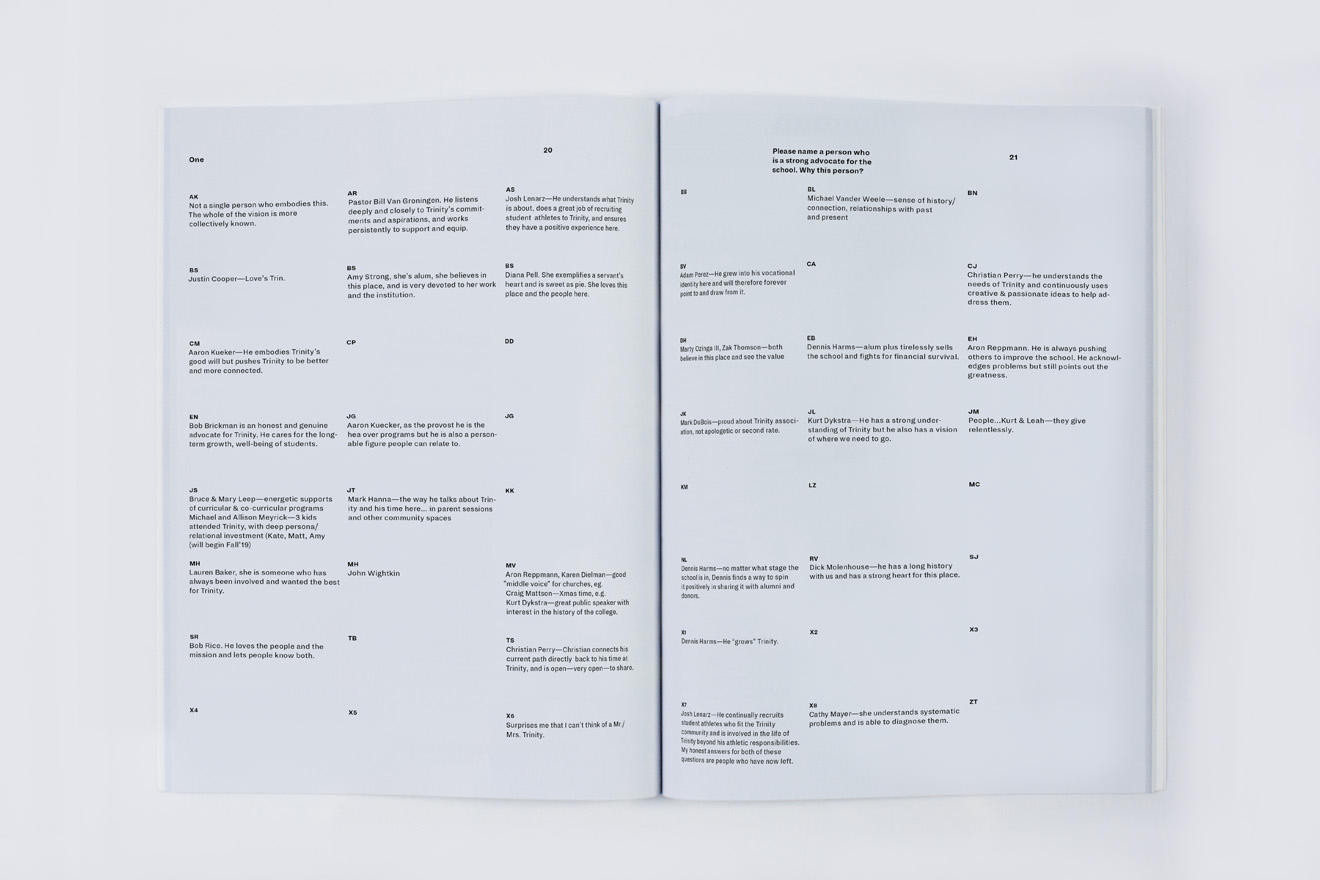 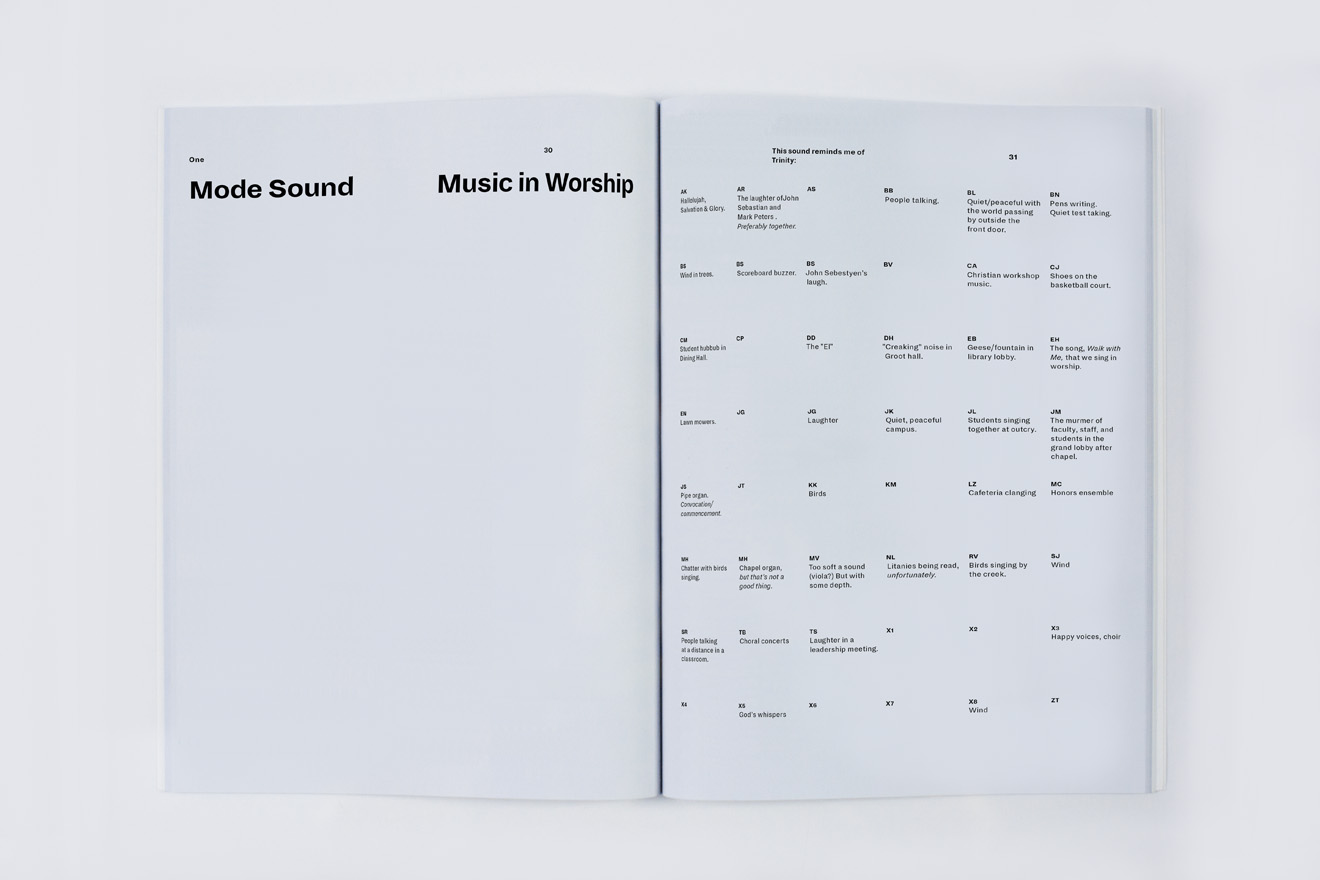 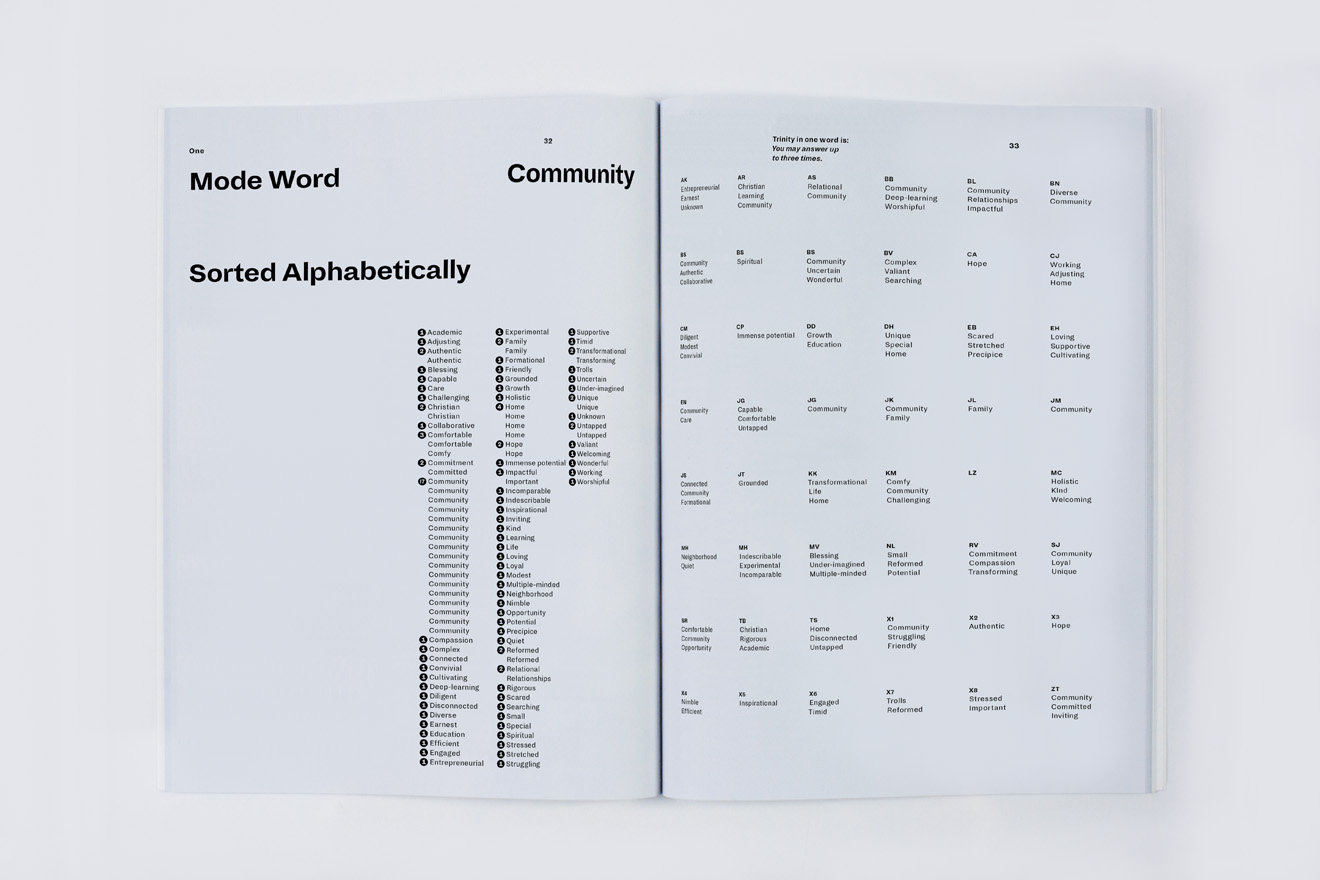 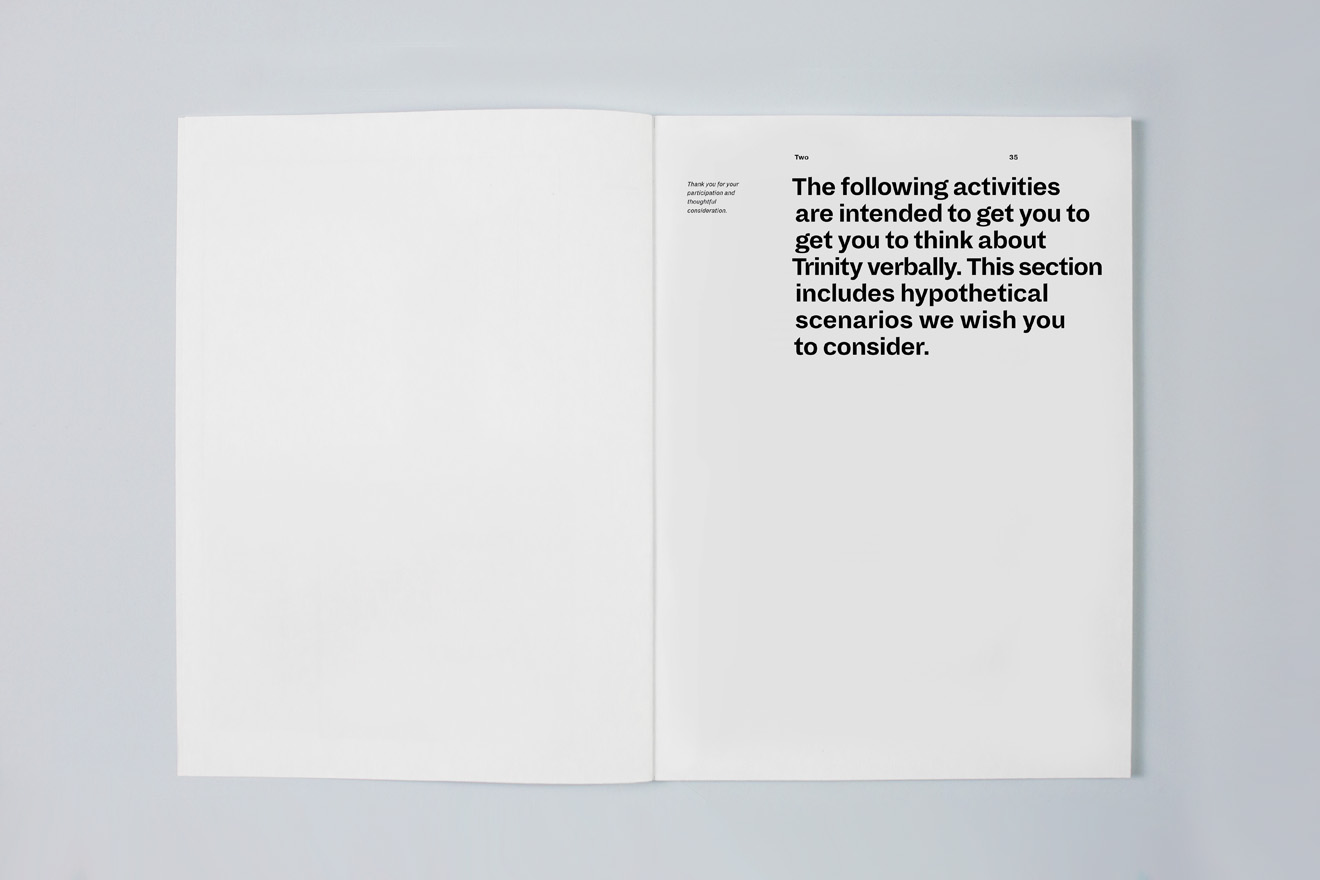 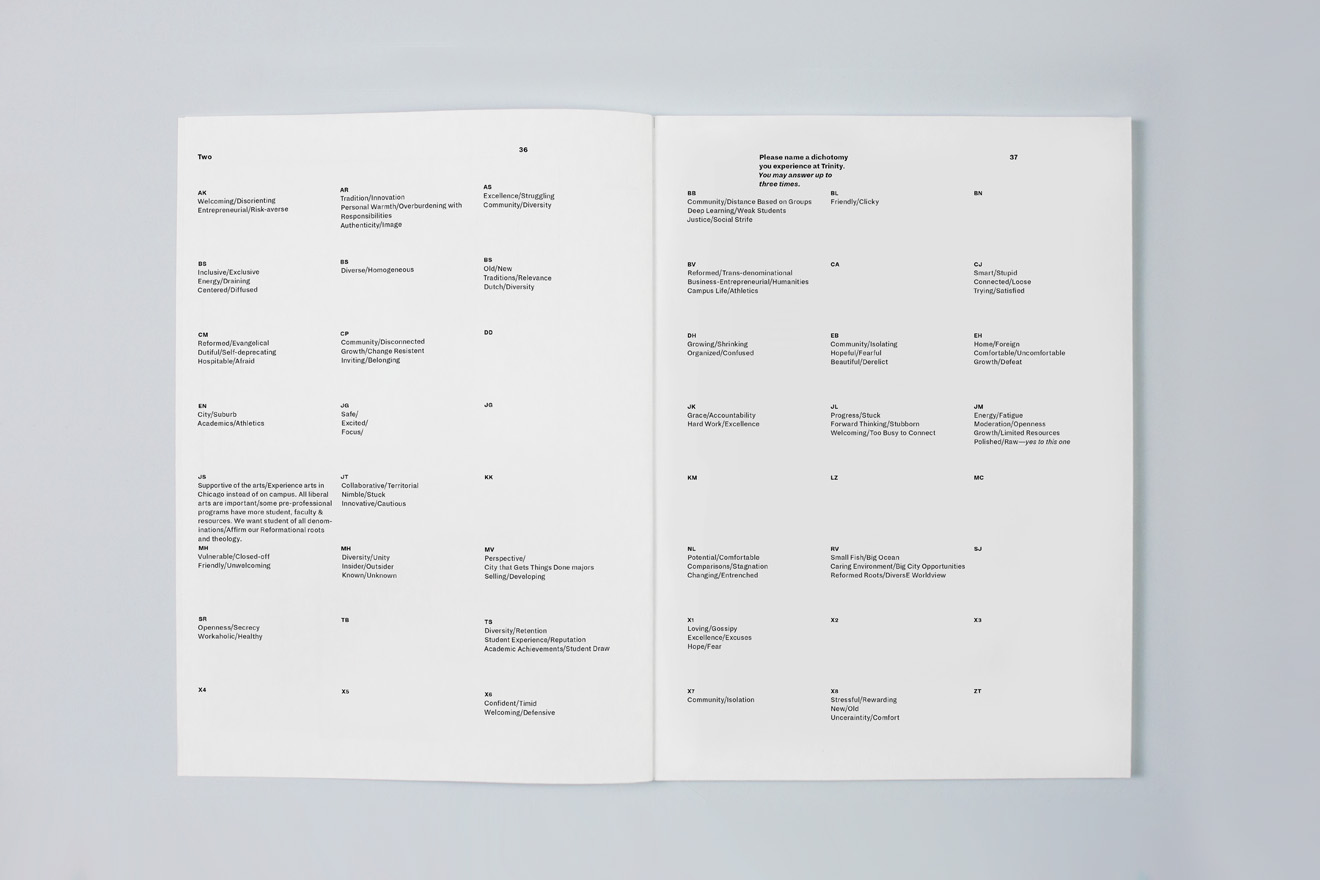 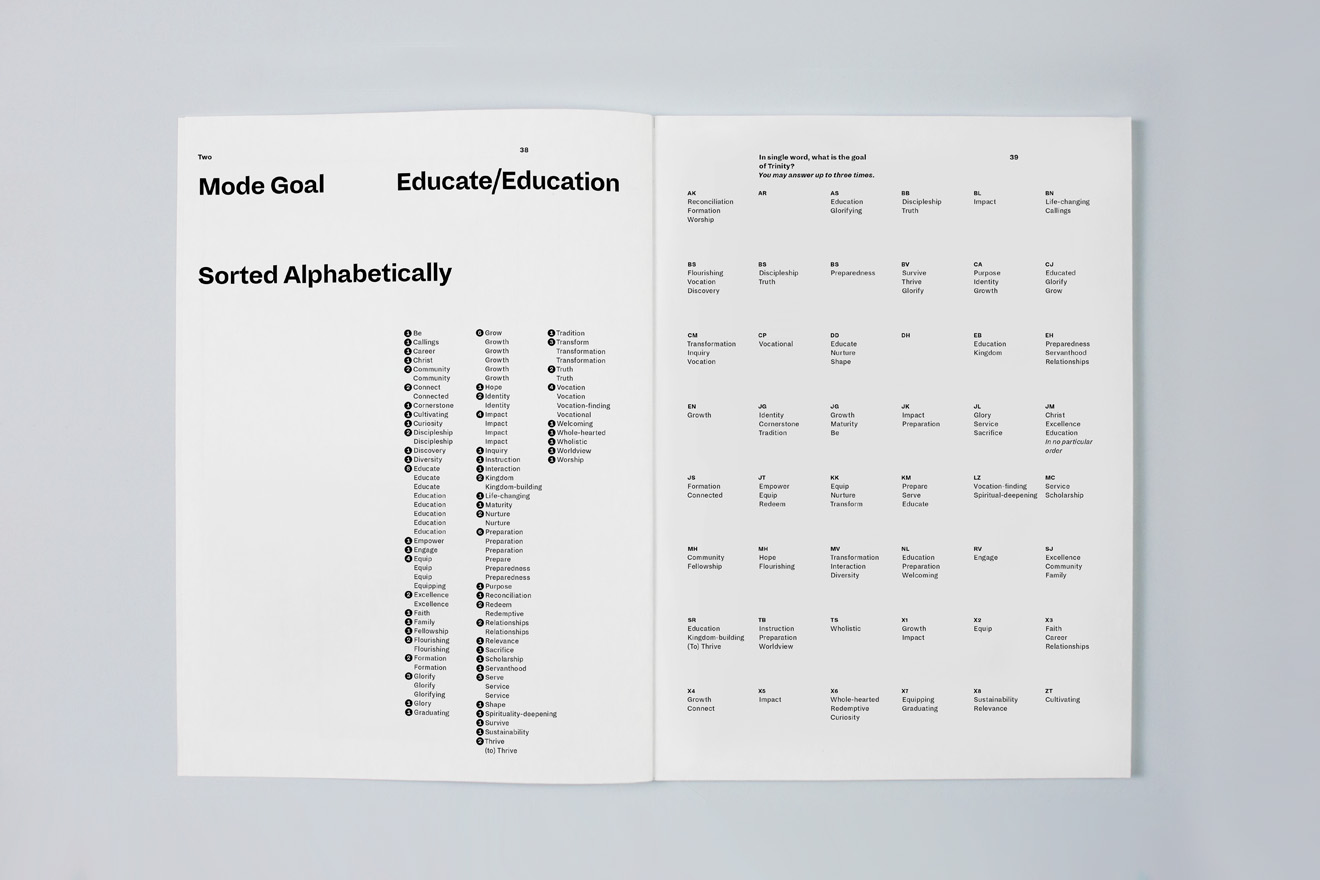 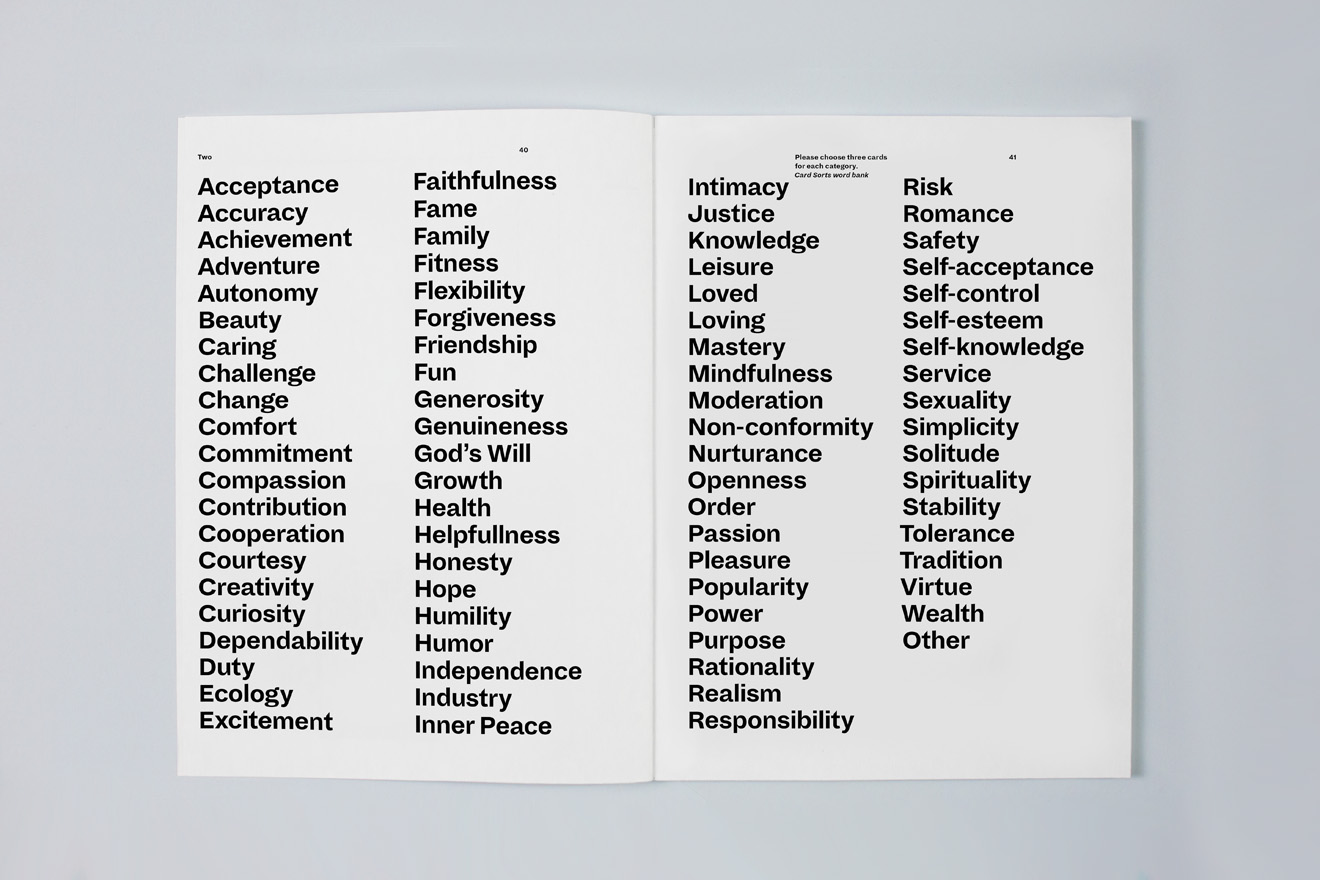 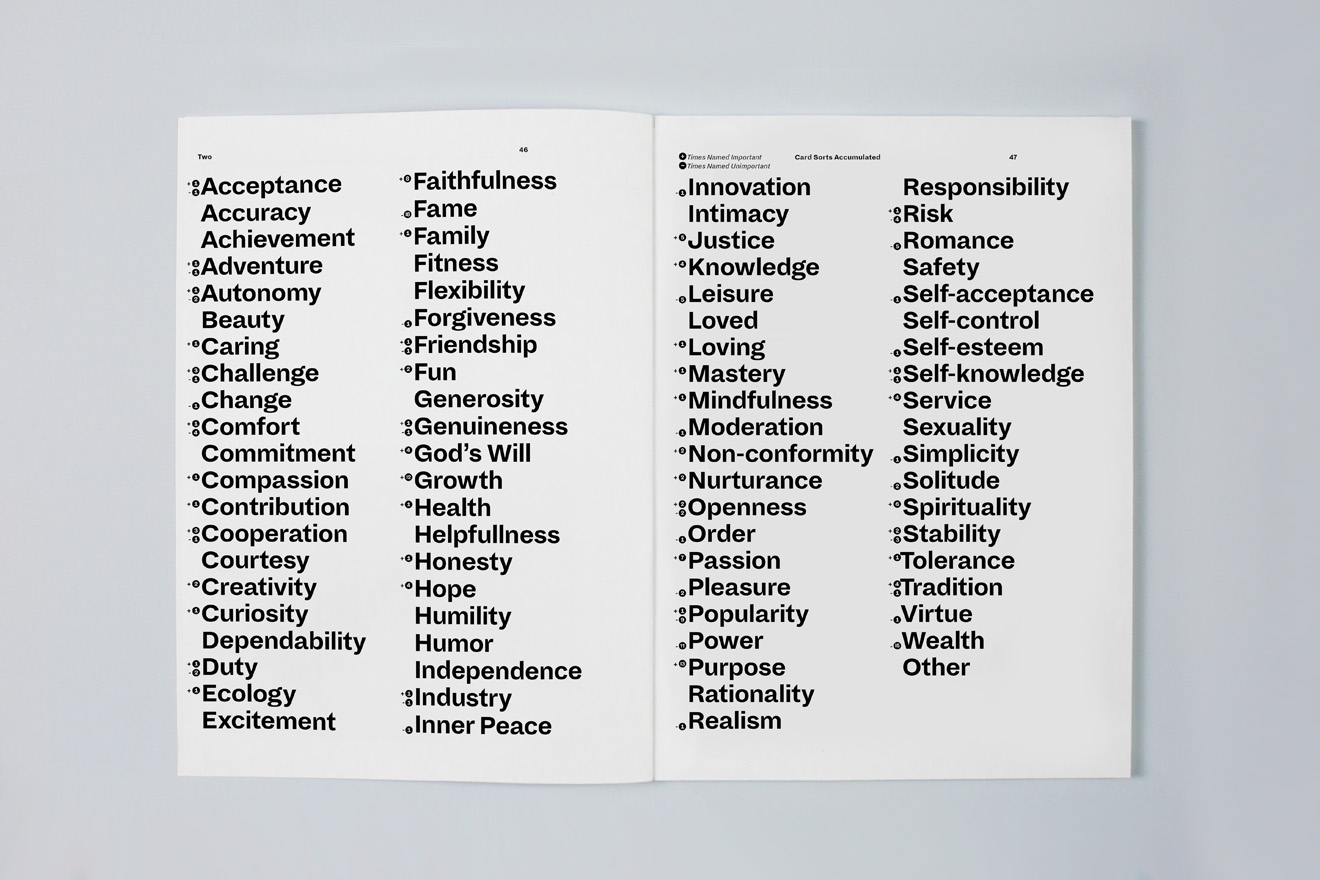 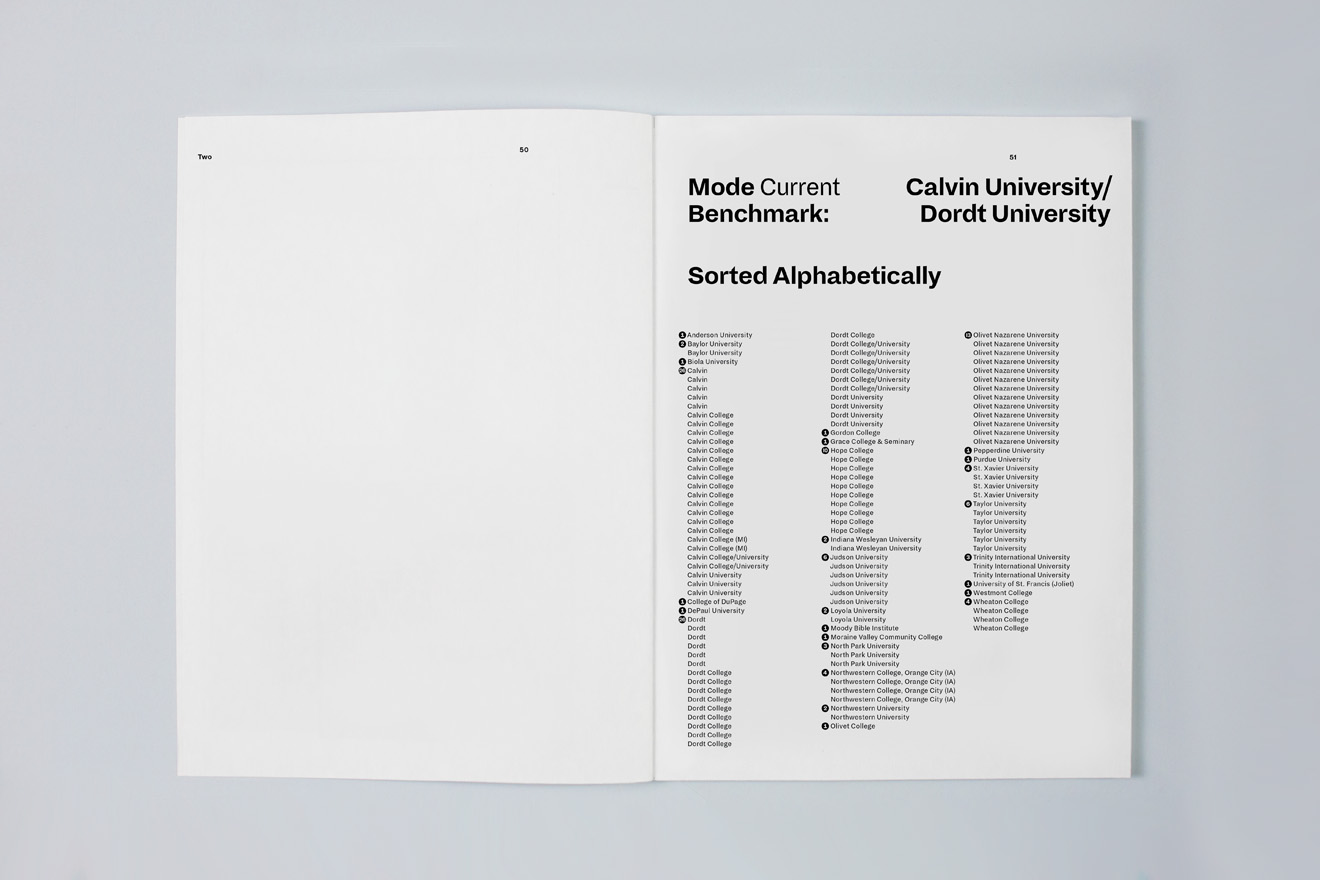 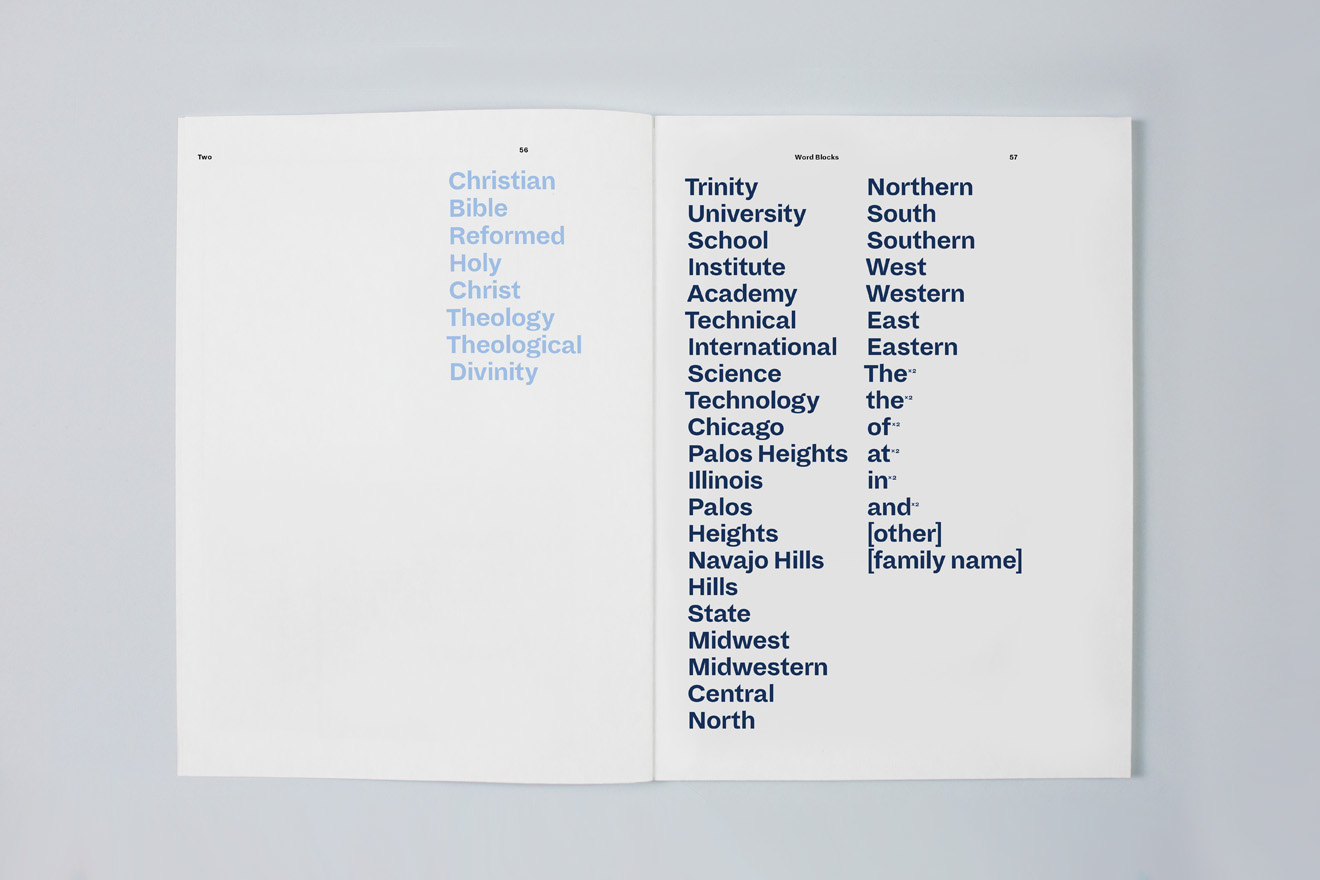 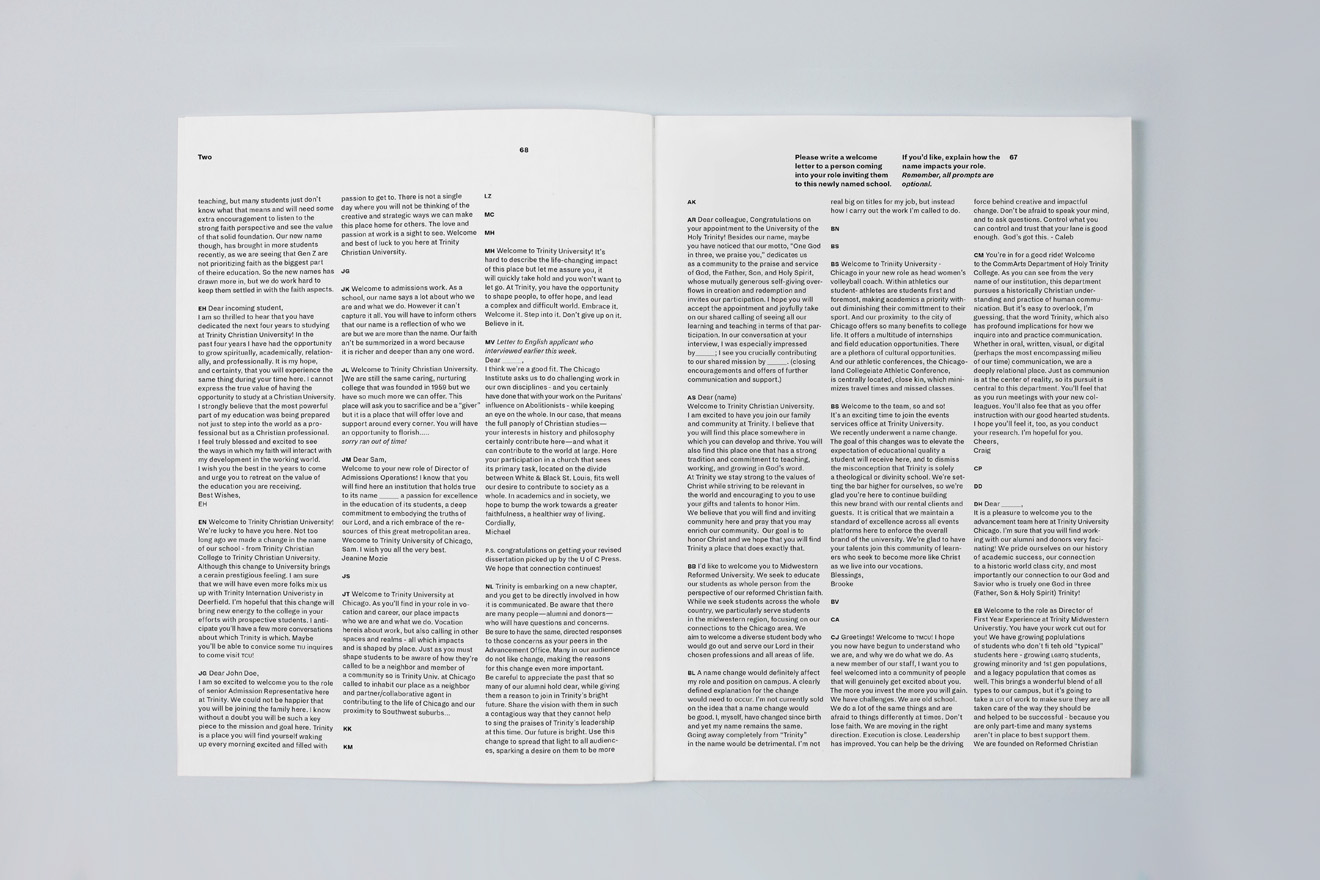 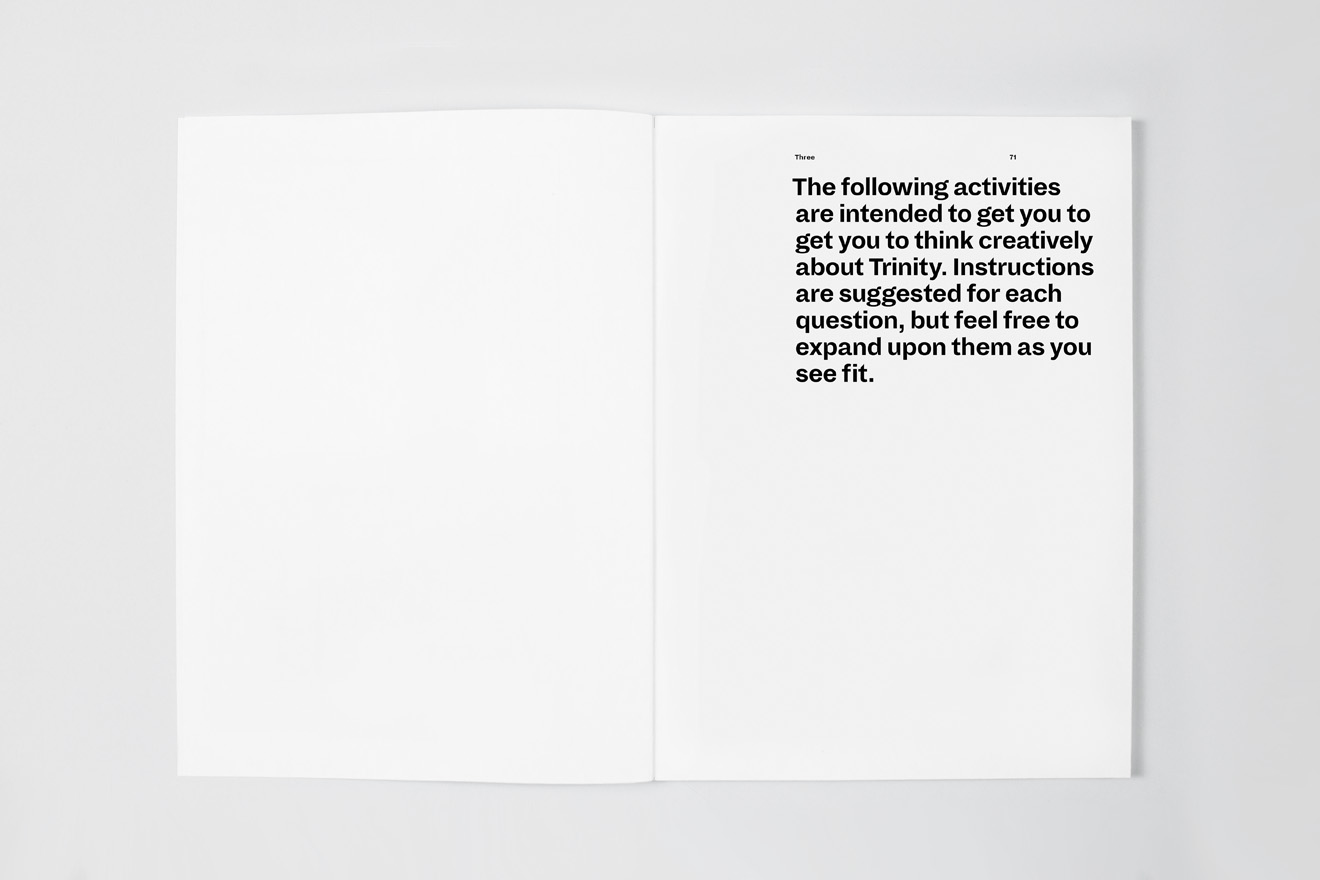 No items found.
No items found.
"The following activities are intended to get you to think creatively about Trinity. Instructions are suggested for each question, but feel free to expand upon them as you see fit."
No items found. 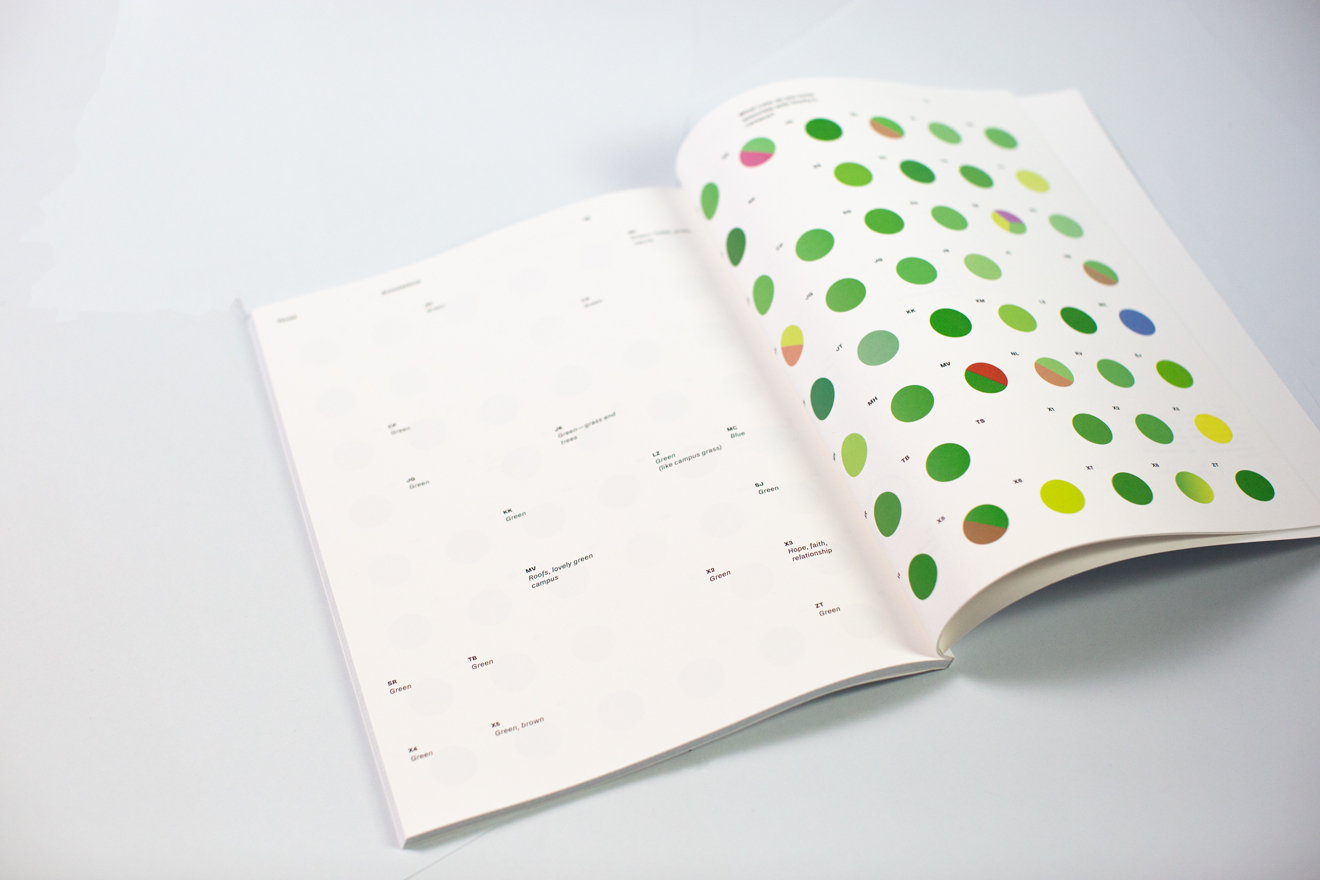 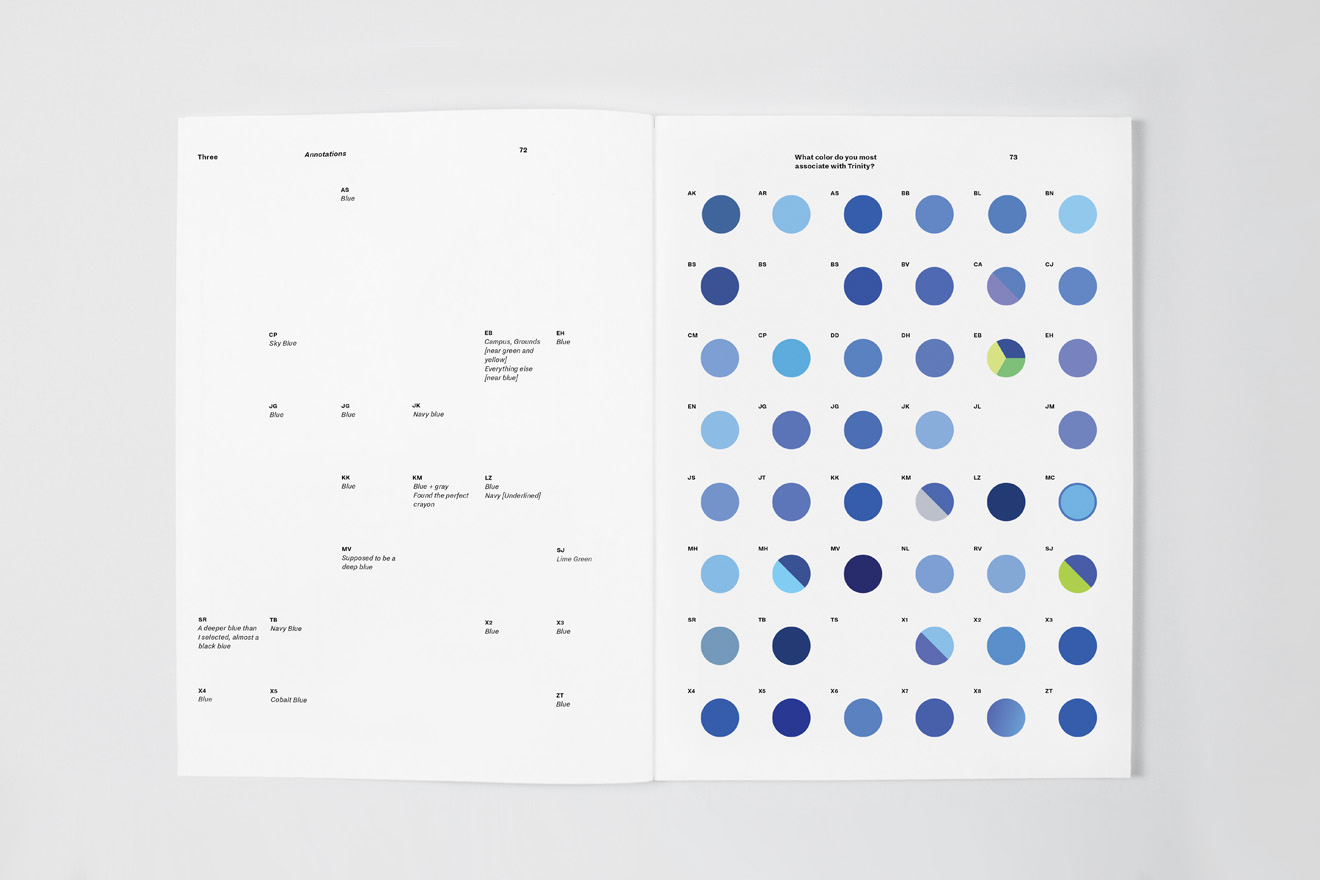 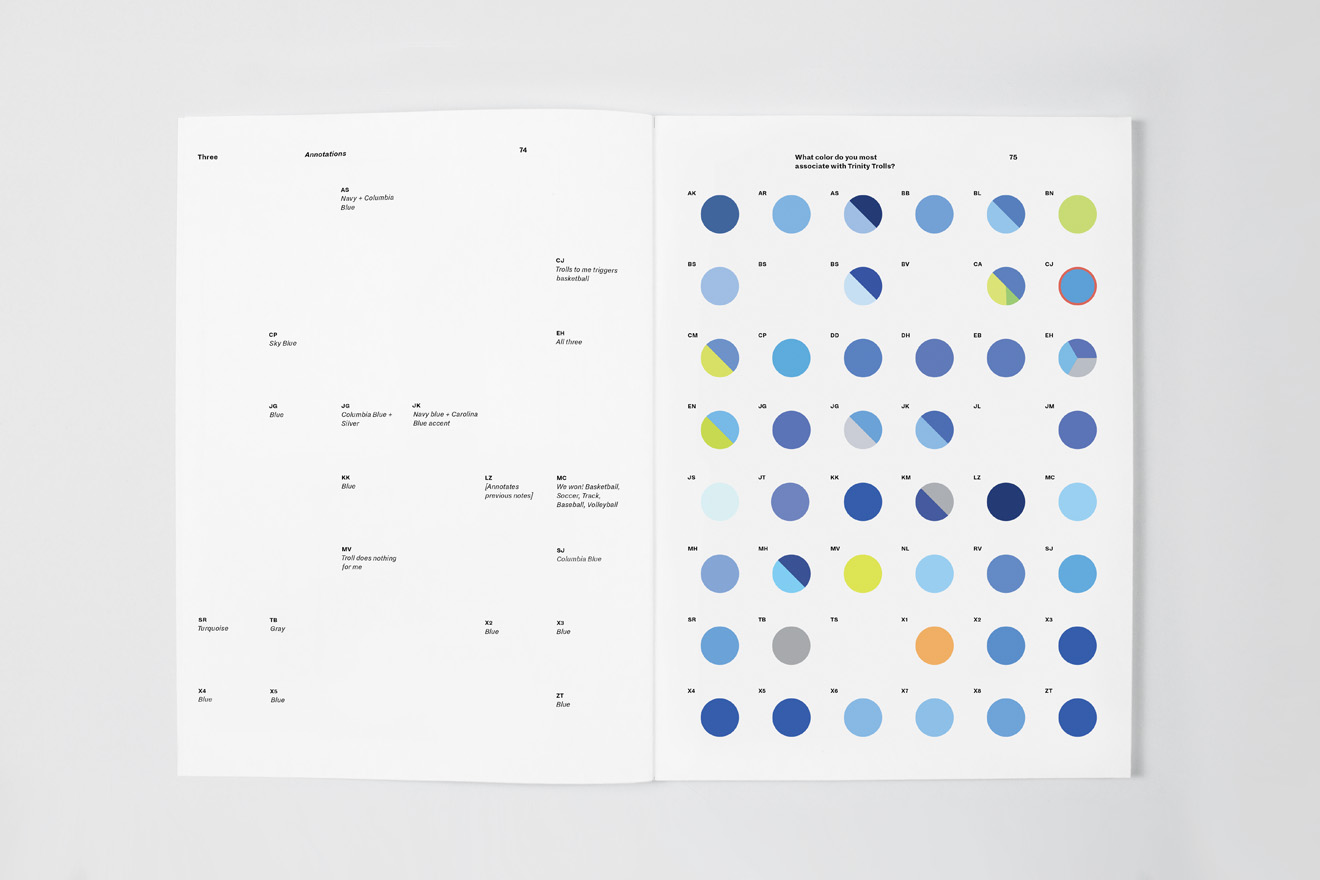 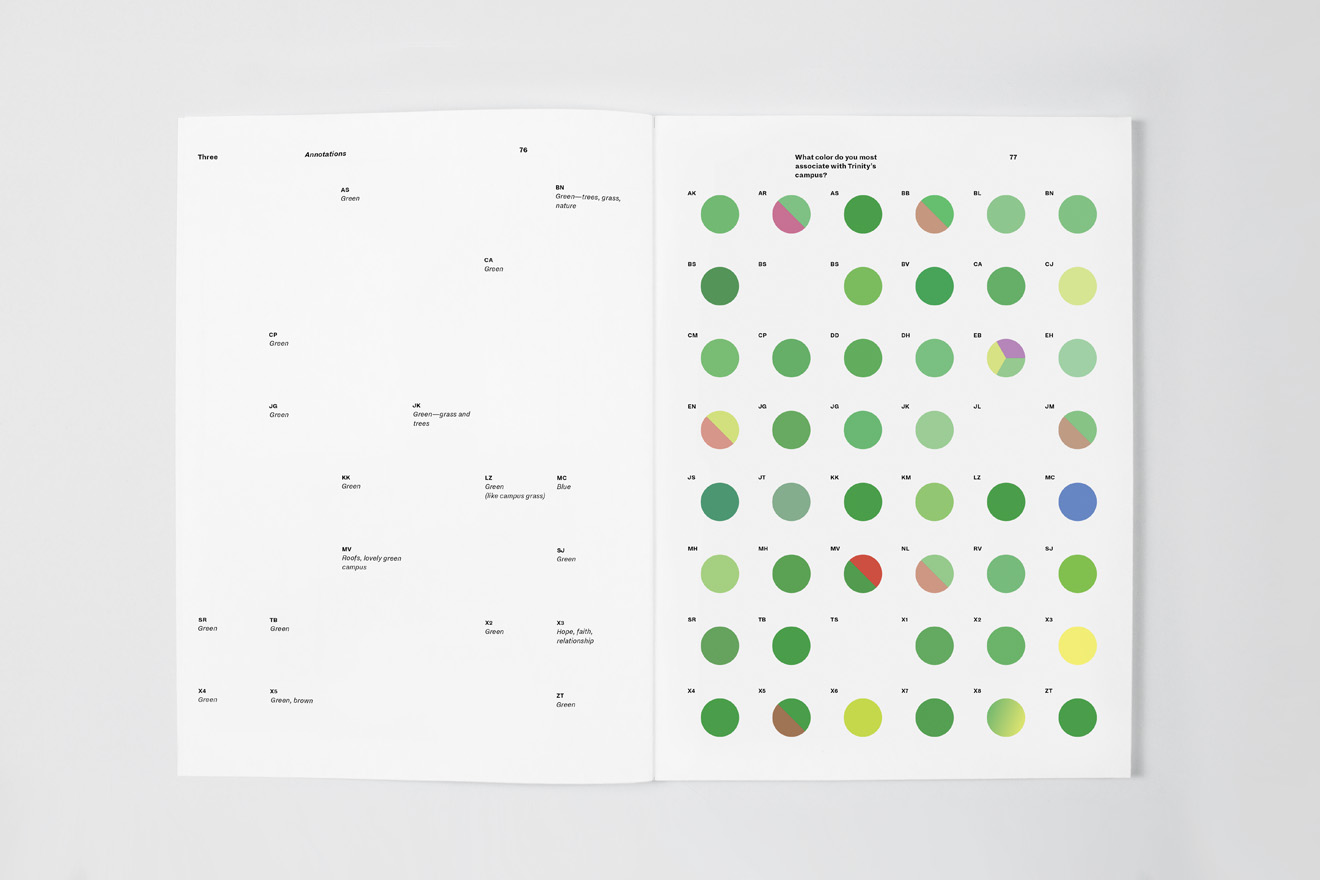 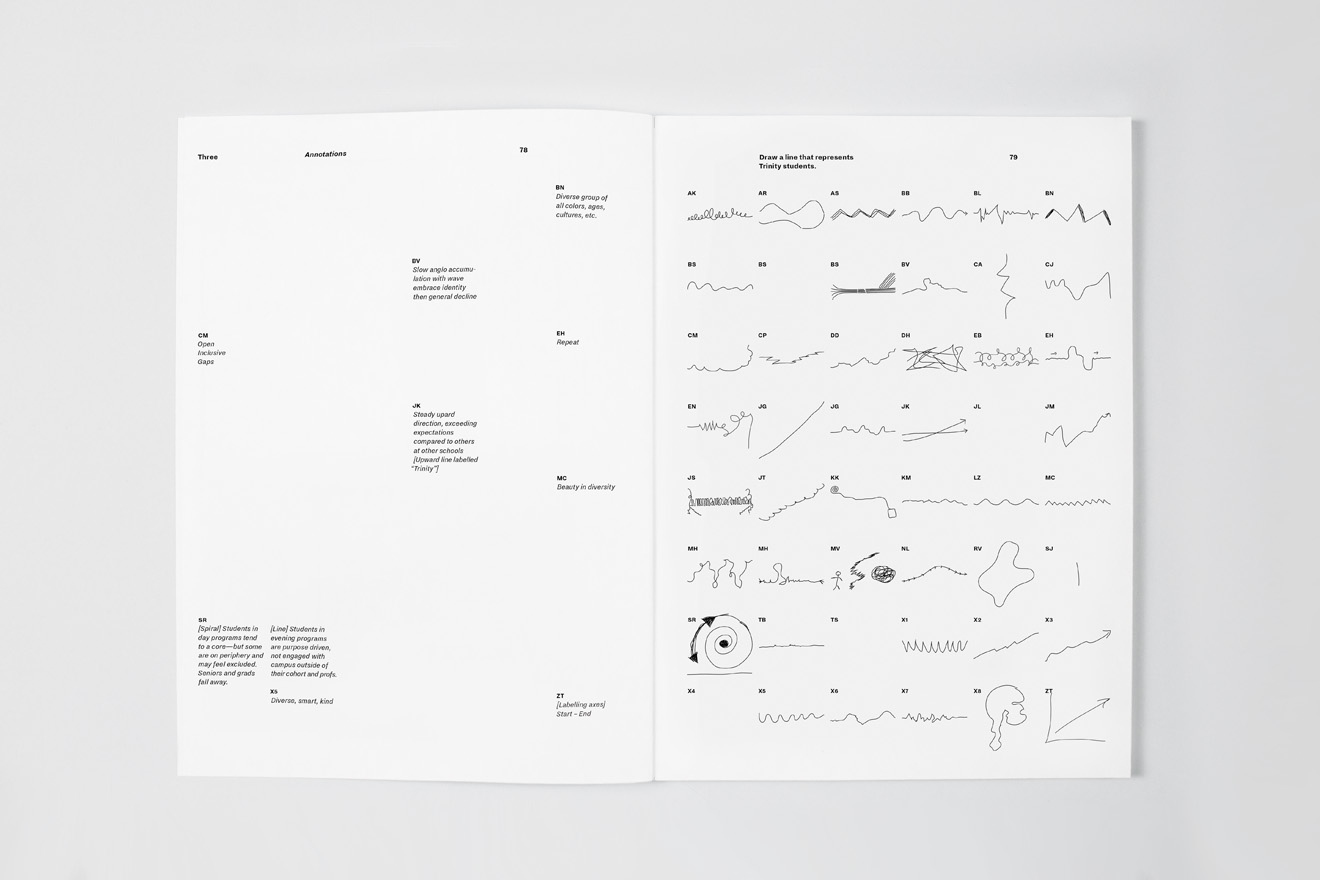 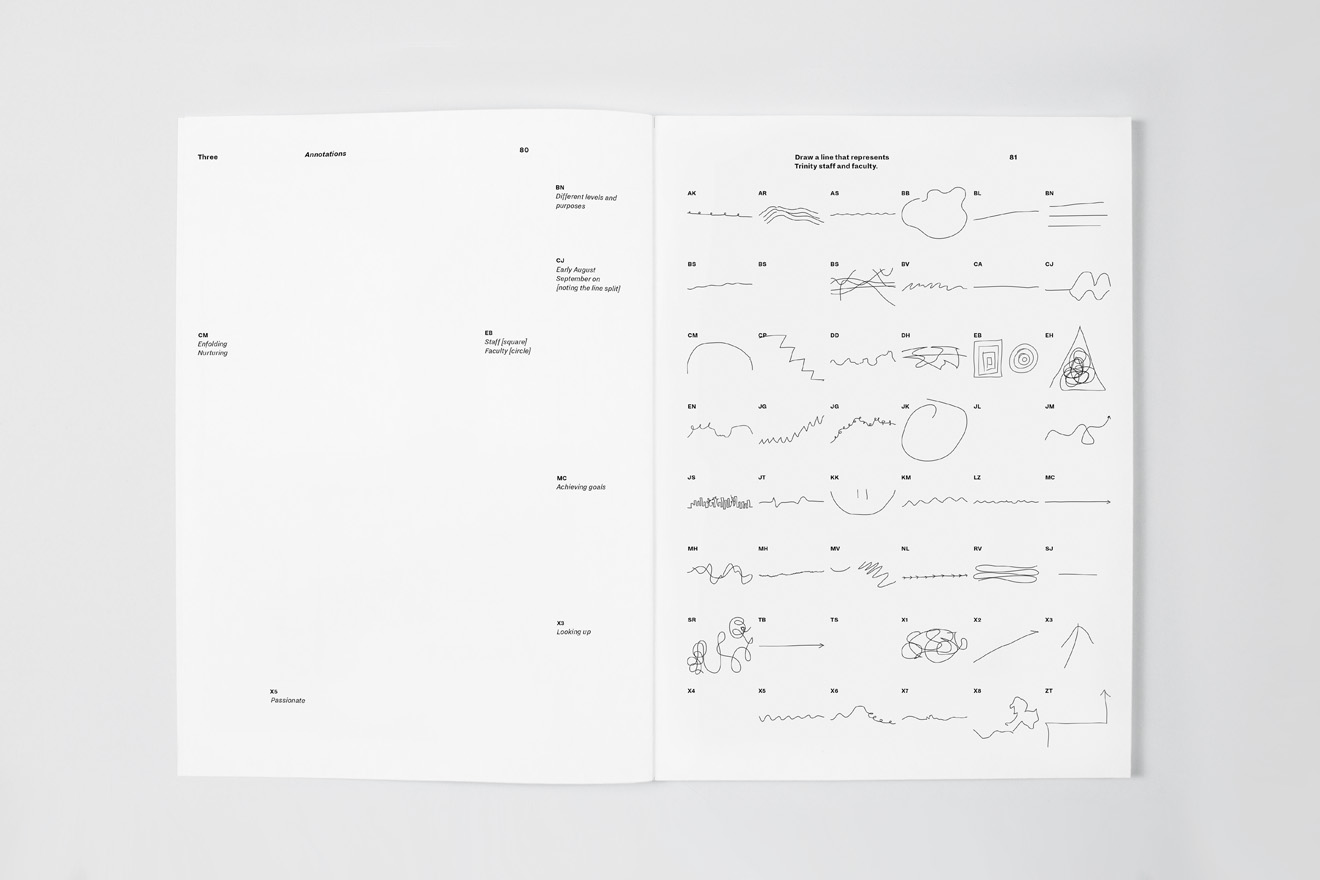 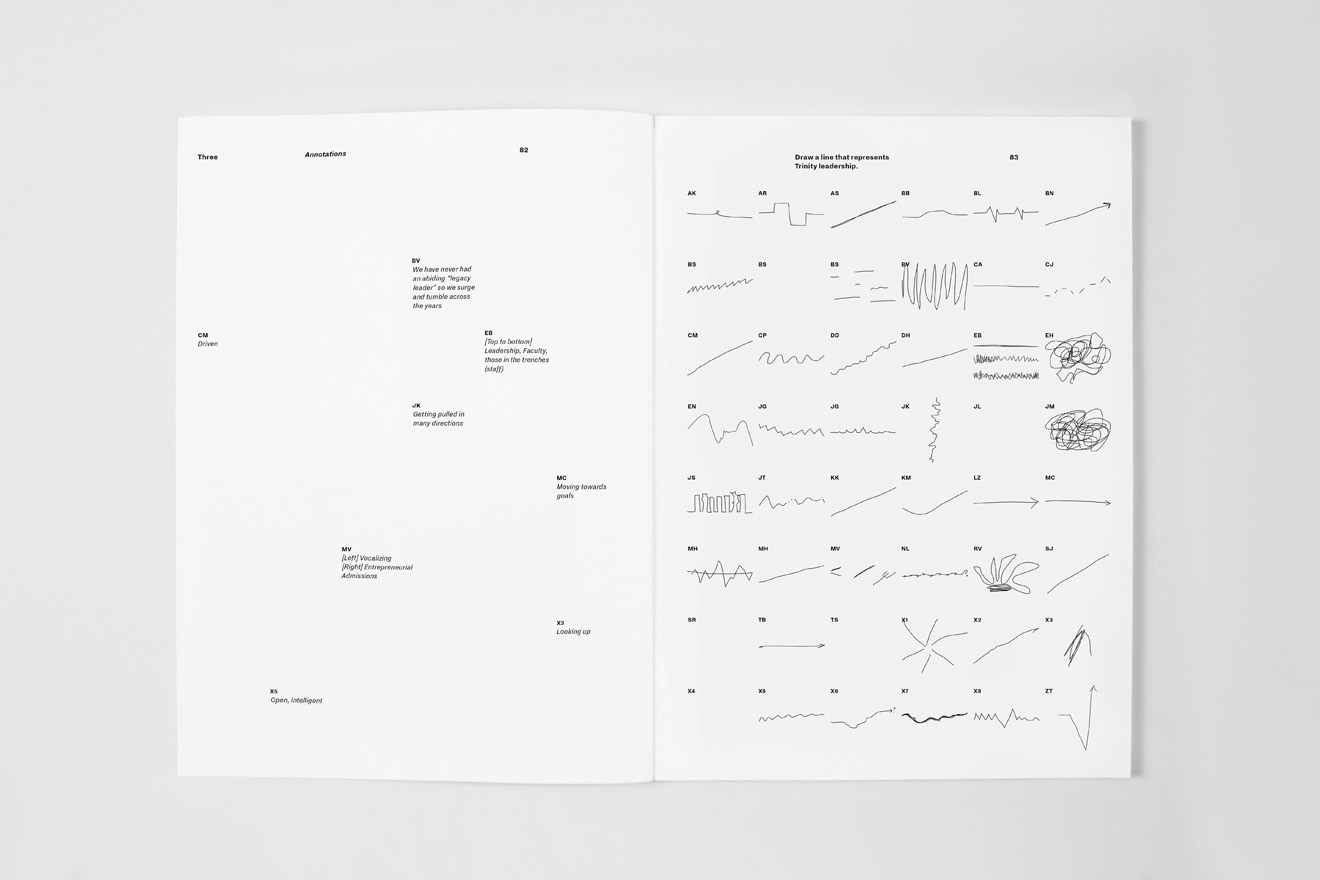 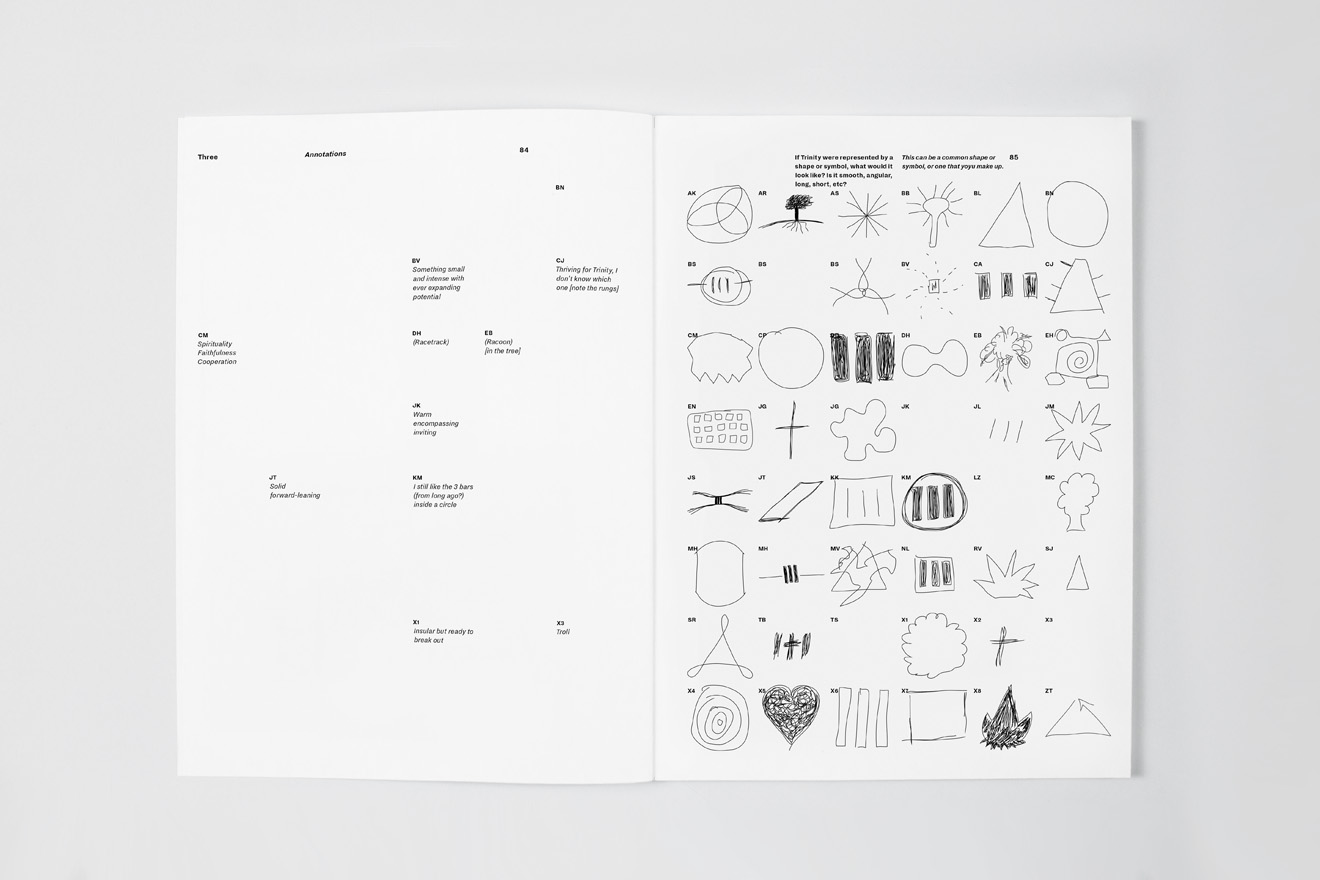 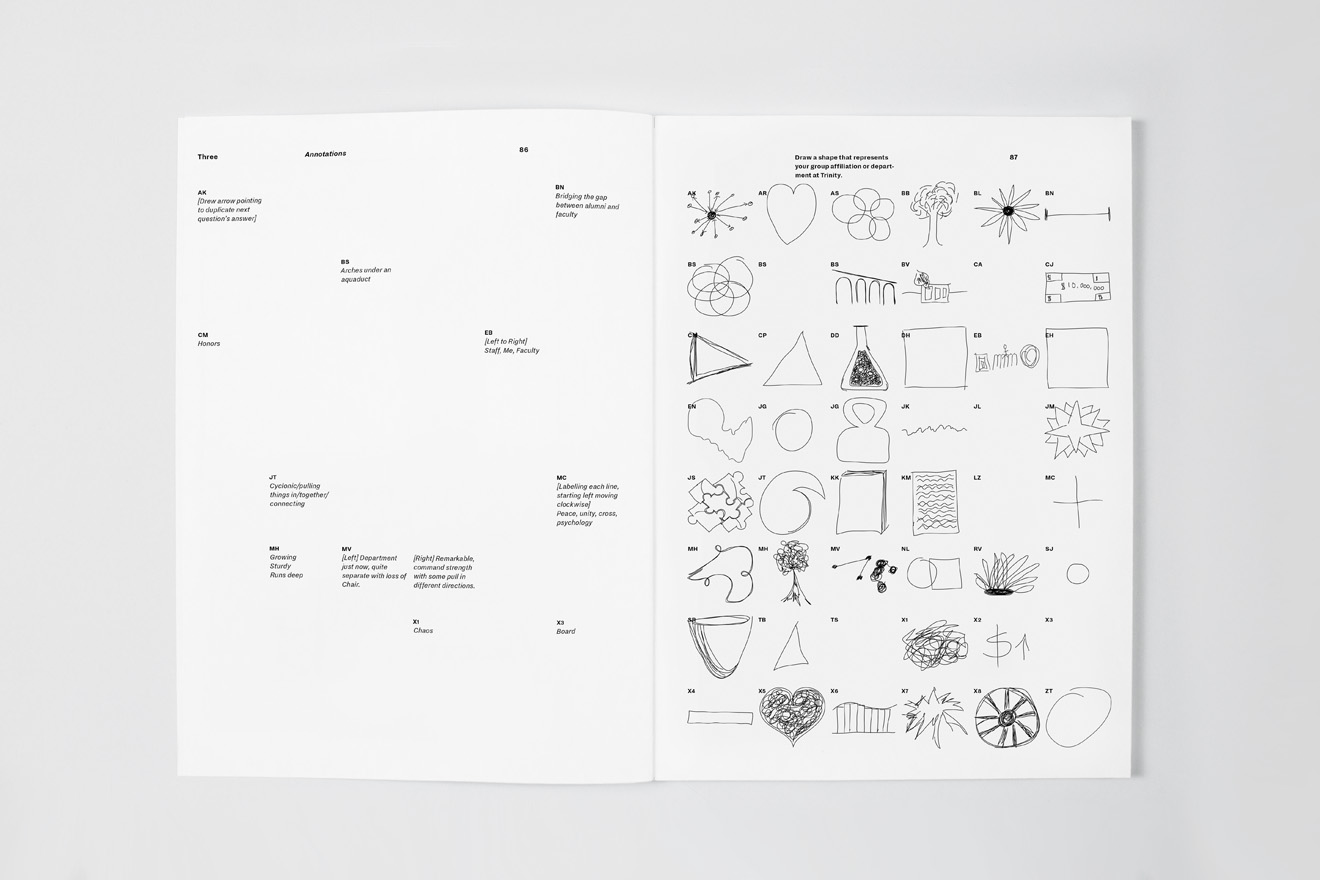 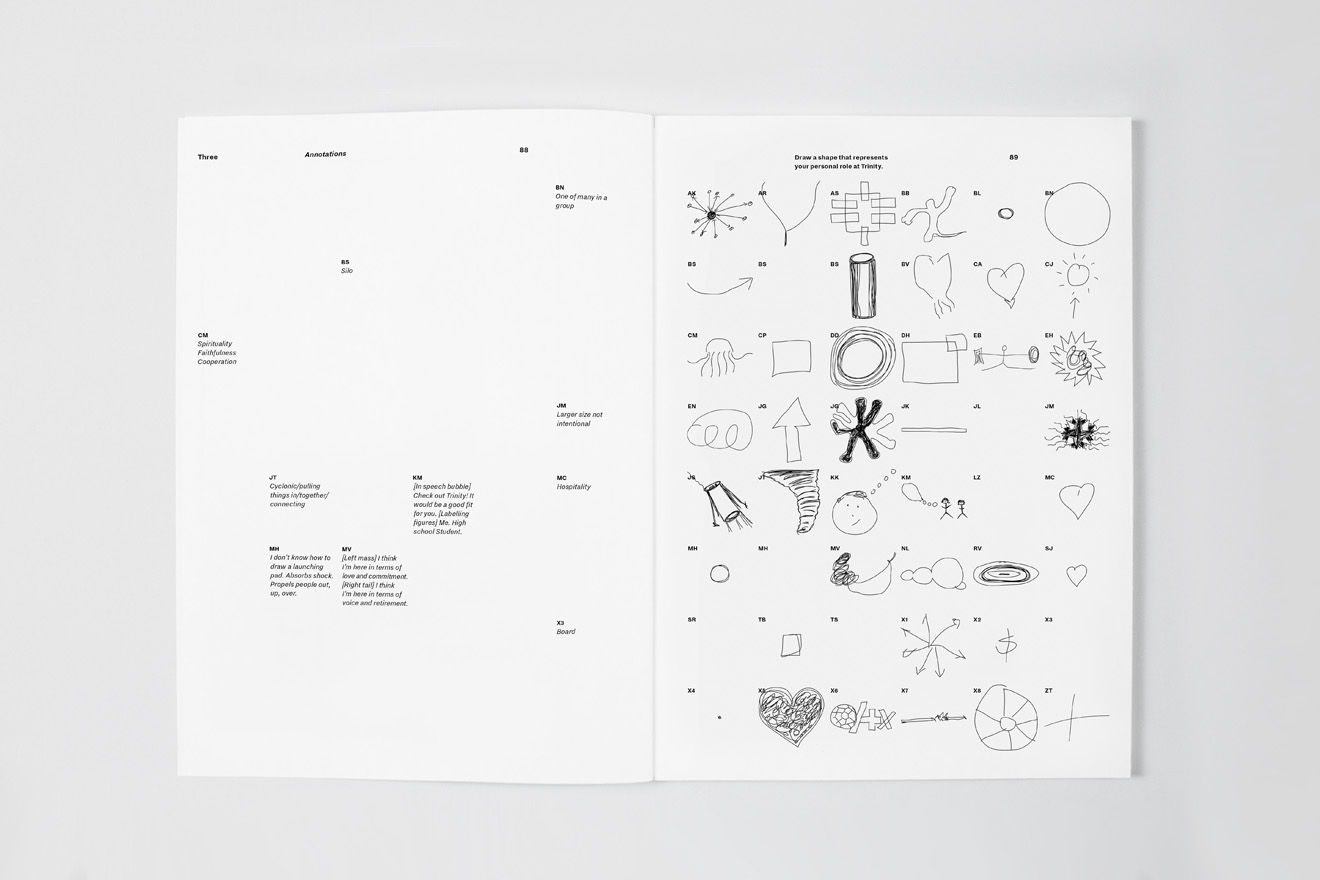